Vivaldos is an all round impressive stallion with interesting pedigree, uphill movements and superb presence. 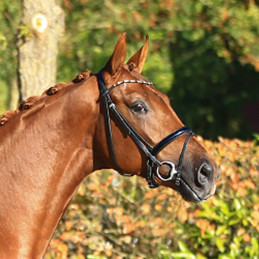 
Terms -  €1400+VAT, allowing unlimited  attempts with chilled semen within the season (ends mid August) on one named mare. If the mare is certified not pregnant before the end of September then a 100% credit applies the following year to spend on any stallion from the same stud (and the mare can change going into a new year)

About & Performance - Vivaldos caught the eye of many in his Hanoverian licensing in 2018, he was a premium stallion who displays everything you would hope to see in a young stalllion. He is ideal for breeding due to his movements and positive attitude towards his work. His pedigree is an outstanding mix of great dressage stallions which have produced Grand Prix offpsring, providing him with balance, the great elastic movements and all round amazing presence.

In 2020 Vivaldos was awarded the Oldenburg Main Award of the year based off his high quality progeny.

At his first show in 2021, Vivaldos qualified directly for the Bundeschampionat for 5-year-old dressage horses.

Sire-  Vivaldi  is an international star having been successful up to Prix St Georges, he was reserve champion in his performance test in the Netherlands, he also won the Pavo Cup for 5 year olds in 2007. In  2008/9 he won the KWPN stallion competition and was awarded a 10.0 for his trot due to his great elevation. All three paces are impressive with his spacious walk, supple canter with an outstanding attitude towards his work which he passes on to his progeny.

Damline- His damsire Desperados has never finished lower than eighth individually at the five championships he has attended, and has never gone home without a team medal. He has three team golds (Rio 2016, WEG 2014, Herning 2013), a team silver (London 2012), a team bronze (Aachen 2015), in addition to two indiviual silvers (Aachen 2015) and two individual bronzes (Rio 2016, WEG 2014). In his international career with Kristina Bröring-Sprehe, he has never scored below 71%, and in the previous two season he has scored 80%+ on all but three occasions; in the freestyle at the Rio Olympics, he scored 87.142%.

Progeny -  Vivaldos' first foals impress breeders from all over the world. They show an enormous amount of drive, a great uphill tendency and they carry power. The foals are very correct in foundation, very typeful with a lot of character and charisma. Vivaldos has sired numerous auction foals at the various breeding associations.