Highly sought after son of Vivaldi with an exceptional trot 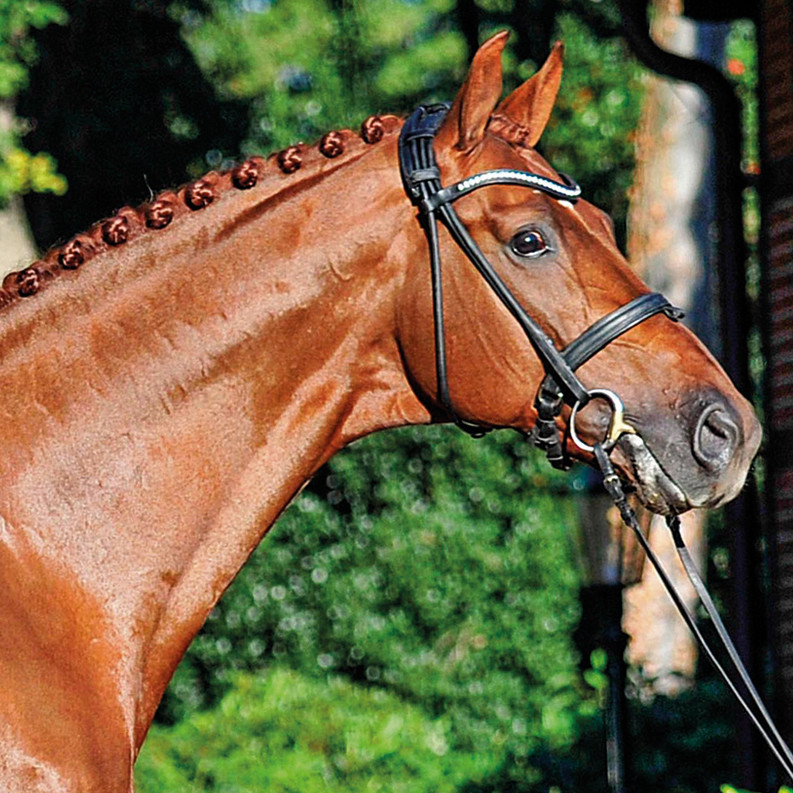 
Terms  - €2200+VAT, allowing unlimited attempts with chilled or frozen semen, for one named mare in one breeding season. If the mare is certified not pregnant before the end of September then a 50% credit applies to spend on a Schockemoehle / Helgstrand covering the following year. If the first AI of the year is July 1st or later, the credit the following year is 100%.

About - Vitalis was a spectacular new entry for the 2016 breeding season and we are thrilled to be offering him again in 2017. This exceptional stallion is sought-after world wide. Very modern and big moving, Vitalis is in the fast lane in breeding as well as in sport. He has impressed the breeding world with his huge, elastic trot and relaxed, rhythmic canter. He is very rideable, and you never see his rider Isabel Freese without a smile on her face!

Performance - He was first reserve champion of the main NRW licensing in 2009, and dominated the dressage index of his stallion performance test in 2010 in Warendorf From the very beginning, he notched up wins and placings in dressage classes, including at the Dutch stallion championships and at the World Young Horse Championships. As a five-year-old, he was sold to American rider Charlotte Jorst, and was placed with her in the finals of the World Young Horse Championships as a six-year-old, having already dominated the US championship in his age-group. With record marks of 10.0 for trot and 9.8 for canter, he was clearly ahead of the other competitors. Since returning to Germany, he has been trained up to advanced level and is successful up to intermediate I. In 2016, he won both small tour classes at Ermelo on scores over 74% with Isabel Freese.

Sire - His sire Vivaldi was internationally successful with Hans Peter Minderhoud, and has 19 licensed sons in Germany. Vivaldi was himself Reserve Champion of his stallion performance test with 9.0 for walk and canter as well as 8.5 for trot, and won the five-year-old Pavo-Cup in Holland, won three stallion competitions in 2008, and in 2009 won the final of the KWPN stallion series, receiving a 10 for his trot. Both Vivaldi's sire Jazz and damsire Krack C competed at grand prix. Almost 100 Jazz offspring have reached grand prix, and he is currently ranked fifth on the WBFSH Sire Rankings, having led the rankings for four years (2008-2011) and having never been out of the top five since the current rankings began; a more successful record than any other stallion.

Damline - Damsire D-Day was champion dressage stallion of his performance test and acted as a schoolmaster at advanced level for many years after being gelded. His influence is strongly felt in Swedish dressage breeding. Third sire Argus competed up to 1.50m level showjumping and also at grand prix dressage, while Aktion J, who follows in the fourth generation, counts as one of the most successful dressage horses of his generation under Hungarian Gyula Dallos. The licensed stallion Qarco van het Graethemhof, bred in Belgium, comes from this dam line.

Progeny - With his first crops, Vitalis caused a stir: In Rhineland in 2014, his daughter Virginia K was the winner of the elite show and at the Westphalian Week, all five of the three-year-old mare and gelding finalists were offspring of Vitalis. At the autumn elite auction in Münster-Handorf, the four top-priced horses were all offspring of Vitalis, with two of them selling or more than €200,000 apiece. To date, 18 of his sons have been licensed, including Veneno, who was sold for €310.000 in Vechta, and a total of six premium stallions. 2015 brought another rich crop: His daughter Victoria's Secret was the four-year-old Bundeschampion, where two other descendants of Vitalis also reached the final, and she was also the 2016 World Young Horse Champion. In 2014, Vitalis dominated the World Young Horse Championships six-year-old's division; his offspring ranked first, third and sixth.