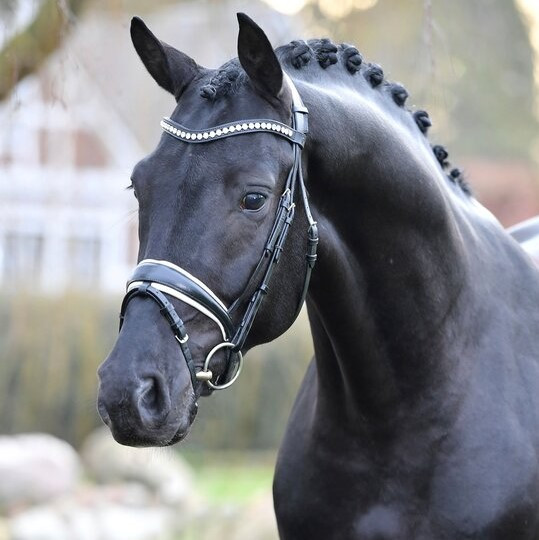 
Terms - €950 + VAT for unlimited attempts with frozen semen, on one named mare in one breeding season. If the mare is certified not in foal by the end of September, you will receive a 50% credit for the following season to use on any stallion from the same stud. If the first AI of the season is after 15th June, your credit in the event of no pregnancy is 100%.

About - V-Plus was the top priced stallion of the PSI Auction in 2018 and is without a doubt a stallion that exceeds all expectations. He has long legs and is built very uphill, coming very close to the ideal model. With a very impressive third place in Warendorf, V-Plus qualified for the finals of the Bundeschampionat and has thus passed his stallion performance test for performance and is now fully recognized.

Performance - V-Plus was the the top seller of the 2019 PSI Auction after going for the outstanding price of 1.3 million euro. V-Plus Gold is the full brother to V-Plus, which sold last year to Harmony Sport Horses in the U.S.A. for 1.2 million.

Sire - Vivaldi was reserve champion of his stallion performance test, and in 2007 he won the coveted Pavo Cup under Dutch Olympian Hans Peter Minderhoud. In 2008 and 2009, he won the KWPN stallion series, achieving marks of 10.0 for his trot. He has competed internationally up to prix st georges, scoring over 72%, and is trained up to advanced, but has been used predominantly for breeding due the the high demands placed on him. Vivaldi is now recognised globally as an outstanding producer of sport horses and stallions.

Damline -  The maternal half-sister of V – Plus, “So Fantastic”, was also one of the highlights of the PSI 2018 collection and moved to Patrick Kittel's stable. Dam Farah is also the meternal mother to licensed stallion Sir Romancier (Sir Donnerhall) and the full sister So Fantastic. So Fantastic is the mother of licensed stallions Zonik's Donnerhall who was sold at the PSI Auction and Zauberlehrling PS who is now standing at Schockmelohle stud and was Oldenburg Regional Champion.