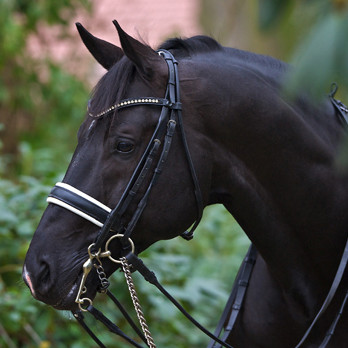 
Terms: €4000 + VAT, allows up to a maximum of 3 attempts to achieve one pregnancy with frozen semen in one breeding season on one named mare. If the mare is certified not in foal there will be no refund or credit due.

Totilas semen cannot to be shipped and mares are only to be inseminated at the approved centres: Twemlows Stud (Shropshire) and Newton Stud (Devon).

About - Totilas requires no introduction. A legend in his own lifetime, he brought dressage into a new era and set three world records in the process. Known for his fantastic, expressive movement and his harmony with his rider, Totilas is now proving himself as valuable as a breeding stallion as he was a sport horse.

Performance - Totilas was the first horse in history to break the 90% barrier, scoring 90.7% to take home individual and team gold at the 2009 Windsor Europeans. He followed this up with three gold medals at the 2010 Kentucky World Equestrian Games, having also scored 92.3% at Olympia 2009 to set a record that would stand for four years. In 27 appearances at international grand prix with Edward Gal, Totilas scored over 80% on 24 occasions. The pair won three World Cup qualifiers and then the World Cup Final as 's-Hertogenbosch on a score of 89.8%. Under Matthias Rath, Totilas was part of the silver medal-winning team at thr 2011 Rotterdam Europeans and finished fourth individually. On his only appearances against Valegro (at Aachen 2014), Totilas was the undeniable victor; winning both the grand prix and the grand prix special on 82% and 84%.

Sire - Gribaldi was champion of the 1995 Trakehner Licensing in Neumünster, and was later approved for KWPN, Oldenburg and the Danish Warmblood societies. At the age of four he won the stallion class in s’Hertogenbosch and took reserve champion honours in the Pavo Cup for four-year-old dressage horses. Under Edward Gal he had an impressive international career, winning the 2004 Zwolle International Stallion Show Kür with 73.70% and the Kür at the CHIO Rotterdam. Gribaldi was proclaimed Elite by the Trakehner society in 2003, and in 2005, based on the performance of his 6- and 7-year old offspring, the KWPN awarded him the keur predicate. In 2008 Gribaldi was proclaimed Trakehner Stallion of the Year. At the time of his death in 2010, there were 707 KWPN registered Gribaldi mares, over 300 of which had received the ster predicate. Among his offspring are Painted Black, Sisther de Jeu, Hofrat, Siro, Unee BB, Atterupgaards Orthilia, Winnetou GEP, and more than 60 other offspring competing at grand prix.

Damline - Totilas' dam produced two other offspring competing at intermediate and advanced level, as well as Totilas' full sister Uusminka. From his grand-dam Elsa came the advanced level dressage horses Talan and Uljanoff. Damsire Glendale is a son of grand prix showjumper Nimmerdor, prolific sire of jumping horses, while third sire Akteur is the sire of grand prix horses in both jumping and dressage.

Progeny - Totilas' offspring are impressing as much as their sire. From his first crop, 10 sons were licensed with various societies. He now has more than 20 stallion sons, including Total Hope, who is out of Rio individual silver medallist Weihegold OLD. His son Trafalgar won the stallion competition for his age group at the KWPN show in February 2017, while in 2016, the top two spots were occupied by the two Totilas sons Toto Jr. and Governor. Totilas' foals inherit his expressive movement and charisma, and he is ideally suited to a mare who needs improvement in the trot.