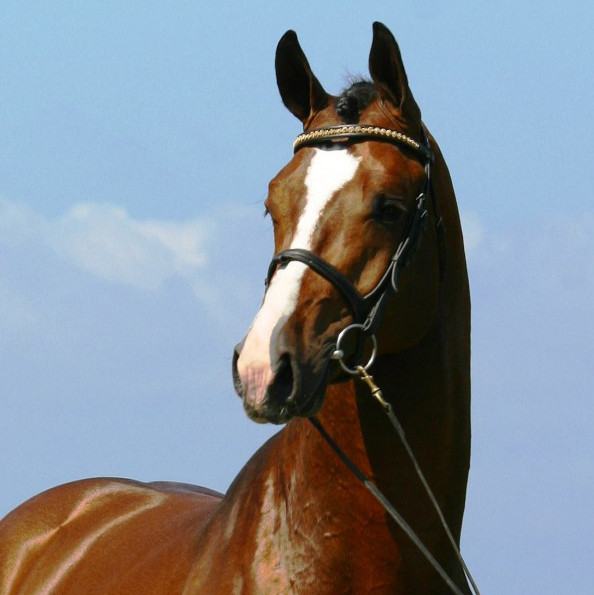 
Terms - €1800 + VAT for unlimited attempts with frozen semen on one named mare in one breeding season. If the mare is certified not in foal by the end of September, €1500 + VAT will be refunded.

About - Tornesch has been instantly recognisable on the international circuit in recent years, due to his missing eye. After an accident in his youth, Tornesch jumped his way up the levels with about 30% vision in his right eye, before it was removed completely in 2014. After less than three months away from the ring, Tornesch was back - and better than ever. He competed with Malin Bayard-Johnsson for eight years, reaching the very top of the sport, and retired from grand prix aged 16 to act as a schoolmaster for his owner's daughter - a role he has filled beautifully, in a testament to both his temperament and rideability.

Performance - In his first season competing internationally, Tornesch finished in the top ten in several grand prix's, including classes at Olympia, Stockholm and Arezzo. He has been part of two European Championship teams, finishing ninth individually in Madrid 2013, and jumped at three World Cup Finals. Together, he and Malin have won grand prix's in Stockholm, Arezzo and San Giovanni, and finished in the top five of a World Cup qualifer an outstanding 10 times. In 2012 they helped Sweden win the FEI Nations Cups in Barcelona and Falsterbo, and come second in Rotterdam. After missing the Olympics with a minor injury, Tornesch won the Stockholm Grand Prix and came third in the Olympia Grand Prix in December 2012. Since joining young rider Emelie Hugoson-Feldt, Tornesch has been on winning junior Nations Cup teams and placed seventh in a 1.40m class at Flyinge.

Sire - Lux Z started his career in Holstein before moving to The Netherlands. He enjoyed a successful international career with Italian showjumping rider, Jerry Smit; the pair competed at the 2000 Olympic Games in Sydney and won the Pulsar Crown competitions at Valkenswaard and Cannes, and participated in the WEG in Jerez in 2004. His first season in Holstein produced the international show jumpers Gazelle d ‘Aubry, Lux Can Do It, and Lagunas. More than 60 of his offspring have reached grand prix level and he has more than 30 licensed sons, including Non Stop R and Lupicor.

Damline - Tornesch's damline has produced - among others - Lennox and Pinkfloyd de Maibelle, as well as the grand prix dressage horse Farouche R (by Fernando). Damsire Libero H and third sire Caletto I both jumped at grand prix themselves and are proven sires of grand prix horses. Libero unites two of the modern greats, Landgraf and Ramiro. His dam Oktave is by the influential son of Ramiro, Ronald. Ronald competed in intermediate show jumping with Hans Günther Winkler and was the sire of Rocadero (Champion stallion Neumunster 1982), Saluut (licensed by the KWPN, sire of Margie Goldstein Eagle’s Grand Prix jumper, Saluut II) and dam sire of Alcatraz (1988 Stallion Performance Test Winner), Latouro (1988 Champion Stallion), Captain Incipit and Lord Incipit.

Progeny - Tornesch's sons include Turmalin  - one of the most talented young horses in Sweden at the moment, now jumping internationally at 1.50m level - and six other licensed sons, including Hanley and Tullamore who are both licensed with the KWPN.