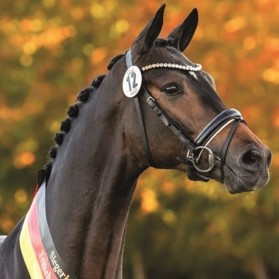 
Terms - €1000+VAT for unlimited attempts with chilled semen, for one named mare in one breeding season. If the mare is certified not in foal before the end of September, then a 50% credit applies the following year.  If the first AI of the year is July 1st or later, the credit the following year is 100%.

About & Performance - "A very special stallion. His basic movements are the very best quality, regarding mechanics and elasticity. He possesses a wonderful type and is always focused on his work. The pedigree is secured. A stallion who was able to inspire us", was the enthusiastic comment of the licensing commission about Rheinglanz, the exceptional champion stallion of the Trakehner licensing in 2020 in Neumünster.

Sire - In 2016, Helium finished his 14-day performance test in Schlickau as best stallion, with a final score of 8.58, an overall dressage score of 8.24, 8.50 points for the jumping overall score. In 2017, Helium was successful in young horse tests and dressage horse tests. He finished his sports horse test. His first year of foals was outstanding. At the auction in Medingen, his four foals realised an average price of more than 20,000 Euros. Helium provides top-priced foals as well at the Trakehner auctions. In 2018, Helium was champion of rideability in the second part of the sports exam and won several dressage horse tests.