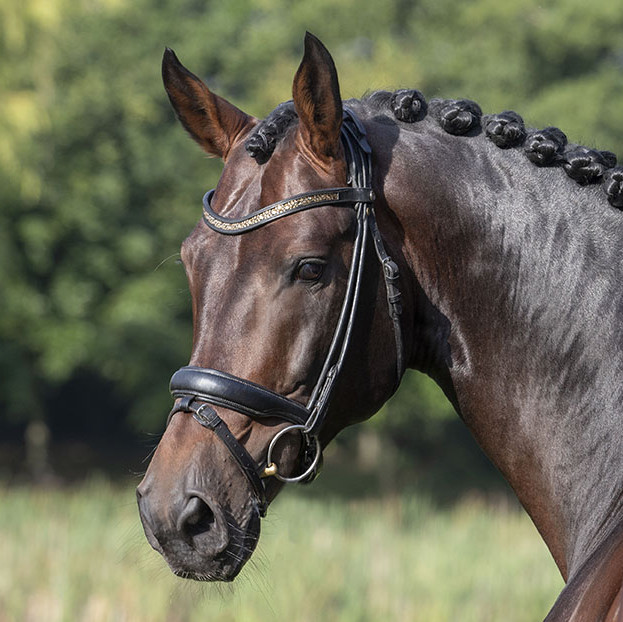 
Terms - €1600+VAT for unlimited attempts with chilled semen, on one named mare in one breeding season. If the mare is certified not in foal before the end of September then a 50% credit applies the following year to spend on any stallion from the same stud.  If the first AI of the year is July 1st or later, the credit the following year is 100%.

About - With a winning bid of €1.2 million, Revolution broke the record for all German stallion auctions at the Hanoverian licensing in Verden in the autumn of 2015. The sold-out Niedersachsenhalle celebrated the "Million-Dollar-Baby" with a standing ovation. High-set, elegant and with three fantastic basic gaits and a wonderful temperament, he is an ideal modern sports horse.

Performance - He was awarded a premium at the Hanoverian and DWB licensings, and won his 30-day performance test in 2016 with seven scores of 10.0. At the Danish licensing, Revolution was champion stallion and the judges announced "if anyone has difficulties in understanding the term “uphill” when used about a horse’s gaits, then they only need to watch Revolution in canter. He is a fascinating stallion and stands in a league of his own." At the 2017 Danish Young Horse Championships, Revolution scored record marks in the finals and claimed the national title. The massively moving stallion socred for 10 for trot, canter, rideability and potential and 8.5 for walk. He totaled 9.70 for the victory. In 2018, Revolution has been selected for the World Breeding Championships under dressage maestro Andreas Helgstrand.

Sire - Revolution's sire, the premium stallion Rocky Lee, is proving himself in his breeding career with winning offspring. Rocky Lee by the top stallion Rock Forever, who is already an established name in international horse breeding owing to top quality progeny. Rock Forever, granted the NRW suffix by the German Federation, competed at grand prix himself before retiring to stud. He desends from the jumping lines of Ramiro Z and Landgraf I, adding strength and athleticism into Revolution's pedigree.

Damline - His dam Rochelle is by the powerful Holsteiner sire Rouetto, who is known for his cross over ability in breeding, producing top dressage horses as well as jumpers. The dam sire of Rochelle is the Hannoverian Wendenburg (1975) who was a good producing stallion, being by venerable Wendekreis. Revolution is his dam Rochelle's first foal. With her thoroughbred maternal bloodline mixed with well-reputed Hanoverian blood through the stallions Wendenburg and Derneburg, she meets all pedigree criteria for a modern dam of stallions.