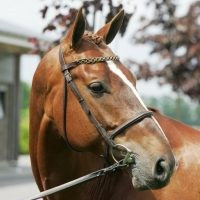 
Terms - €900 +VAT for unlimited attempts with frozen semen on one named mare in one breeding season, if the mare is scanned not in foal by the end of September €600 +VAT will be refunded.

About - This son of the famous Quidam de Revel is an important contribution to the breeding of show jumpers. Quidaro is a fantastic stallion with a good working mindset and attitude. He is an athletic type and moves and jumps with great flexibility and suppleness. He was third in his performance test in Schlieckau, Germany.

Performance - Quidaro and Dominique Nijhof have become a great pair in the sporting community having jumped at Grand Prix shows across Europe together. The pair won their CSI1* Young Horse class in Wierden in 2013 making a good start to the young stallions career. They went on to place 3rd at the CSI3* Theaterhotel Prize in Geesteren three years later, that same year the pair placed 4th at the CSI3* for the ClipMyHorse Prize. More recently they have made appearances at CSI4* shows competing for the Subli Paardenvoeders Trophy and the Medium Tour Final in Ommen.

Sire -  Quidam de Revel is a legend on his own; he has an impressive list of achievements and he himself participated in the Olympic Games in 1992, winning team bronze and finishing fourth individually under Hervé Godignon for France. His dam, sire and grandsire all competed at grand prix themselves - cementing his pedigree as one of supreme reliability. His dam produced a total of four licensed sons, one of them a full brother to Quidam de Revel, and an elite sport mare by Quat'sous, who herself is the dam of three international jumping horses and a CCI2* eventer. Quidam de Revel's two full sisters have produced three licensed sons between them, as well as several sport horses. Ten off his offspring competed at the 2002 World Equestrian Games, including team gold medallist Dollar de la Pierre, who also won a team silver at the 2003 Europeans and finished 7th individually. He has produced more than 130 grand prix offspring, including Maikel van der Vleuten's Verdi, super-sire Nabab de Reve, Guidam, Quasimodo Z, Lys Platiere, Rahotep de Toscane, Quiwi Dream, and Quite Chin Chin Z. Quidam de Revel brings a lot of Thoroughbred blood into the pedigree, with three full-blood stallions in the third generation.

Damline - His mother is the very successful show jumper T-Corrada who jumps at Grand Prix level in Italia with Gianluca Palmizi. His maternal pedigree is built up with the stallions Corrado I – Coriander – Schampus xx – Merano – Manitu xx. Sire Corrado I produced one of the most prolific showjumping sires in history, such as Clinton I who placed 4th individually in the Olympic Games in Athens.