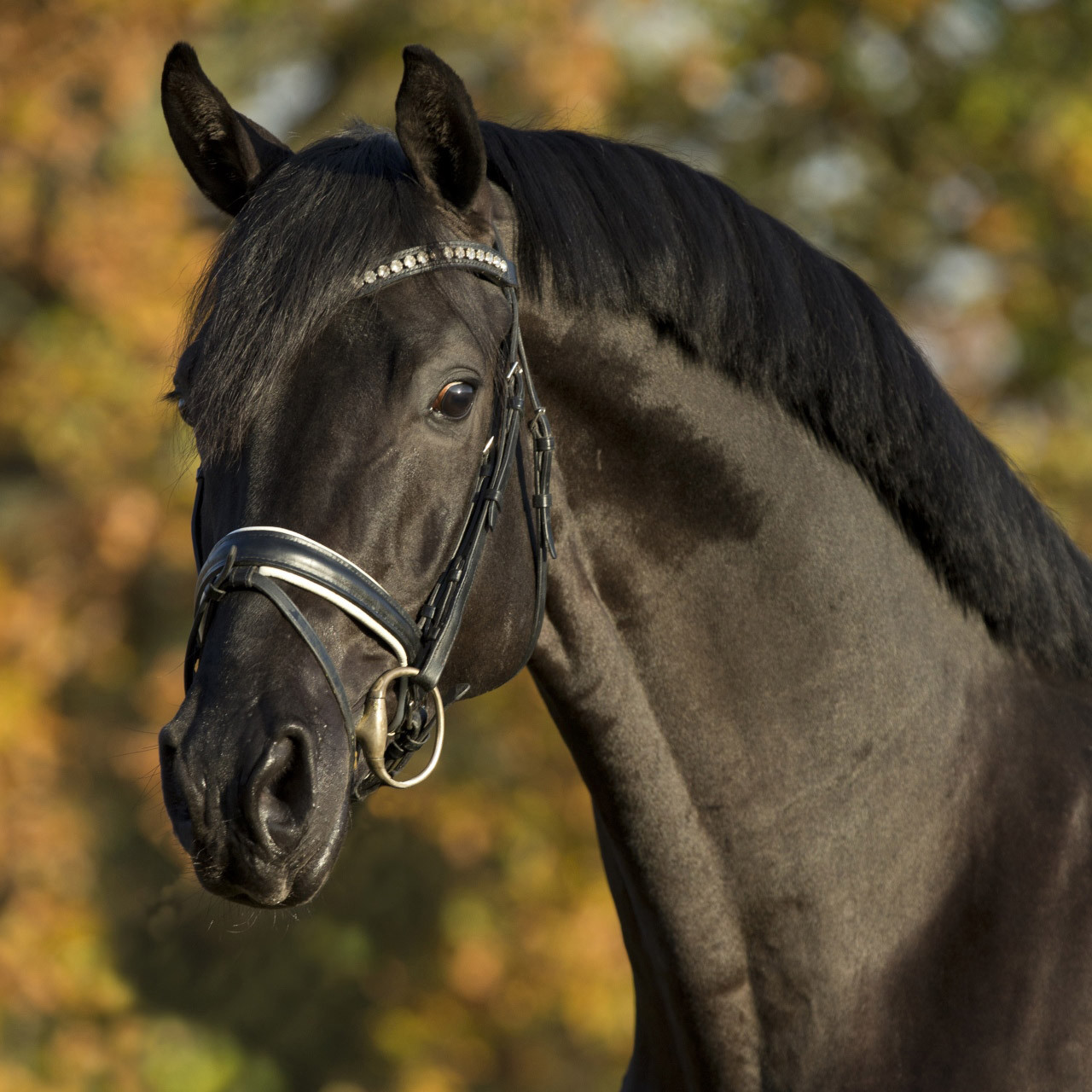 
Terms:  €1500+VAT for chilled semen, allowing unlimited attempts for one named mare in one breeding season. If the mare is certified not in foal by the end of September, €1250+VAT will be refunded.

About - “Loved by the public , celebrated as Champion” – The 2014′ Oldenburg Champion Stallion and dressage winner at his stallion performance test in 2015 and 2016′ main premium winner. Morricone unites the optimal nobility and type alongside striking quality of movements as well as brilliant rideability and strength of character."

“Our Champion Stallion is hard to beat in view of his elegance, type and manner. With his royal appearance and his outstanding movements, always keeping his perfect self-carriage, this noble black stallion, from the breeding of Heinrich Vahle in Friesoythe, inspired the audience and the committee”, so commented the Oldenburg Breeding Manager Dr. Schulze Schleppinghoff. Since then, Morricone has been attracting attention at every presentation.

Performance -  In his stallion performance test he won the dressage part with a score of 9.33 and received the maximum score 10.0 for rideability and walk four times. All basic gaits as well as constitution, character, temperament and willingness to perform were praised with scores of 9.5 and 9.0. As highlight of the year 2016 the Oldenburg Verband proclaimed Morricone celebrated main premium winner due to his outstanding power of heredity combined with his first-class performance record. In 2017 Morricone gave prove of his extraordinary quality by winning the qualifier for the Bundeschampionat. In 2018  at the age of only six, he shone at all his dressage competitions up to medium (M**) level.

Progeny - Morricone’s offspring exceeded all expectations.  Morricone's first crop of foals are all copies of their sire; compact, beautiful models with perfect conformation and friendly, inquisitive temperaments. Several of them were invited to the Elite Foal Auctions and they are much sought after. They stand out with their beautiful and noble type like they were all of a piece. Many champion foals as well as numerous price-highlights feature prominently  well-known elite foal auctions and foal championships worldwide. From his first crop six licensed sons, including two premium stallions in Oldenburg and Hannover, made up a brilliant breeding record for Morricone. Remarkable is the excellent character of his offspring, which present themselves as very drawn to people, with strong nerves and easy to handle.

Sire - Millennium stood second reserve at his performance test in the autumn of 2010, and sold for the top price of €320,000 in the ensuing auction. At his 30-day test in Moritzburg in 2011, Millennium proved to be a dressage talent of the best kind, finishing with the second highest score of all participants in dressage. In 2013, he finished his 70-day test in Neustadt-Dosse, where he was in the lead with 8.66, the highest score of a dressage stallion in a group of 37 participants. He also received several scores of 9.0 and higher. Furthermore, Millennium had a first-class debut in sport; in 2012 he won several young horse classes and became Trakehner Vice Champion in Hanover. Meanwhile, he has won several young horse classes at medium level and is now training at advanced level with Kristina Bröring-Sprehe.

Damline - The dam’s sire Rubin Royal OLD is Main Premium Winner in Oldenburg and international serial Grand Prix winner under Hendrik Lochthowe. Rubin Royale was champion of his licensing, and then won the Hauptprämie, awarded for the best first crop of foals, and was VTV Dressage Stallion of the Year. He is ranked fourth on the WBFSH Sire Rankings for 2016, up from eighth in 2015. He competed at international grand prix, winning the Kür at La Mandria and placing at Aachen, Dortmund and Stuttgart, among others. The grandsire is none other than De Niro.  It would go beyond the scope to honor his breeding record in detail. In fourth generation the Grand Prix winner Rubinstein manifests the pedigree as founder of the modern R-line. This line is also known for the performance-sires Admiral I as well as Thoroughbred Guter Gast xx.