A stallion-maker and grandson of Gribaldi 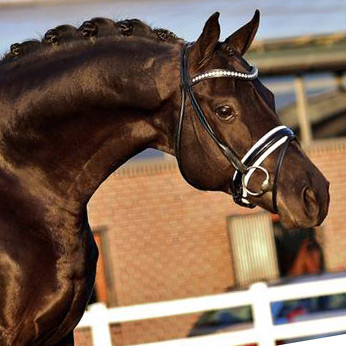 
Terms: €1600+VAT for unlimited attempts with chilled semen, for one named mare for one breeding season. If the mare is certified not in foal before the end of September, €1000 +VAT will be refunded.

About - Millennium is a modern, beautiful stallion with faultless conformation, who is a proven stallion producer, with numerous successful licensed sons to his name. All three basic gaits are of excellent quality; very smooth, and distinguished by a canter that is always uphill, and a trot with lots of freedom at the shoulder.

Performance - Millennium stood second reserve at his performance test in the autumn of 2010, and sold for the top price of €320,000 in the ensuing auction. At his 30-day test in Moritzburg in 2011, Millennium proved to be a dressage talent of the best kind, finishing with the second highest score of all participants in dressage. In 2013, he finished his 70-day test in Neustadt-Dosse, where he was in the lead with 8.66, the highest score of a dressage stallion in a group of 37 participants. He also received several scores of 9.0 and higher. Furthermore, Millennium had a first-class debut in sport; in 2012 he won several young horse classes and became Trakehner Vice Champion in Hanover. Meanwhile, he has won several young horse classes at medium level and is now training at advanced level with Kristina Bröring-Sprehe.

Sire - Easy Game excelled in his performance test, and while he competes to advanced level, his youngsters are proving themselves both in sport and competiton. His father Gribaldi, who competed at grand prix under Edward Gal, proves again and again that Trakehner blood can be used to improve dressage (and jumping) lines, such as with Totilas, Painted Black, 2005 Hannoverian champion Hotline (by the Gribaldi son Hofrat), and to produce champion purebred Trakehners such as Distelzar, Hoftanzer, Zardin Firfod. Easy Game's damsire Schwadroneur also competed at grand prix, and his mother line has produced 38 licensed stallions within the first four generations.

Damline -  Millennium's dam Merle excelled at her own performance test, while Millenium's full sister Miss Undercover is competing in both eventing up to CIC2* level and dressage up to advanced medium, having recieved a premium at her mare test and reached the final of the 'Trakehner of the Year 2010'. Millennium was reserve champion at his 30-day test in Moritzberg in 2011. The mother line has produced the licensed stallions Mohammed, Mahon and Meisterwind. Damsire Ravel was an elite stallion who also had a licensed full- and half-brother, and produced four licensed sons including Graffitti.

Progeny - Millennium's offspring are correct in conformation and full of character. Of his 21 licensed sons, 8 were awarded premiums; an excellent strike rate. His stallion sons include the sensational Morricone, the 2016 Hauptprämie winner, premium stallion Helium, the young, but very exciting, Marc Cain, and the 2014 Trakehner champion Sir Sansibar. He has also produced a number of state premium mares, and his oldest crops are turning five in 2017 so we will watch them with interest.