A legend in his own lifetime 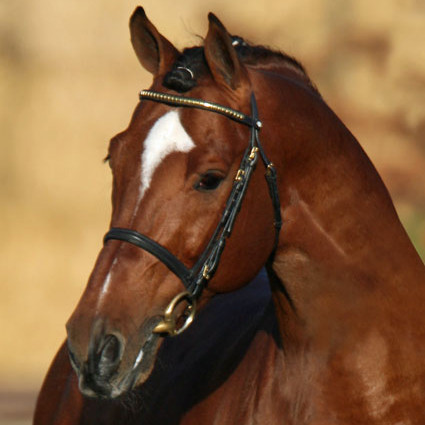 
€500 plus VAT per dose allowing the registration of one foal.

About - Lordanos is without doubt one of the very best sires, and has become a foundation sire within his own lifetime. Lordanos has an unparalleled character and extraordinary rideability. He has proved himself an extremely talented show jumper, retiring to stud sound as an 18-year-old, after an international career spanning more than a decade.

Performance - Lordanos' career began by winning nearly 40 young horse classes. He was successful in 1.40m and 1.50m classes for more than eleven years, with the entire Sosath family, including winning a puissance at a height of over 2 metres under Janne Sosath.

Sire - Lordanos' sire, Landos, and his dam, Ashley, both come from the Holsteiner line 776. This line produced top sport horses and the stallions Calvados I and II, Cortino I and II, Captain Incipit, Lord Incipit, Lauritz J, Rossini, Toledo and the famous and important sire Ramiro. Landos combines the Thoroughbred blood of Ladykiller and Cottage Son with the foundation sire Cor de la Bryère on his damline, via super-sire Calypso I. Landos jumped to 1.40m level himself, and has proved himself as a versatile sire, with not only several grand prix jumpers to his name, but also as the sire of grand prix dressage horse The Lion Kind B, and Mark Todd's Olympic and CCI4* event horse Leonidas.

Damline - The dam sire Ahorn Z comes from the international show jumpers Almé Z and Heureka Z, and has produced many top show jumping horses including Acord I, who was out of a mare by Lordanos' third sire is Calypso, appearing for the second time in the pedigree, both times in the fourth generation.

Progeny - Lordanos passes on his beautiful type and he is compatible to nearly every type of mare. His descendants inherit his good character and temperament, as well as his talent and rideability.

Lordanos has produced an ever-growing number of highly successful show jumpers, such as the striking Lou, who was often unbeatable with Franke Sloothaak in the international Youngster Tour and at the CHIO in Aachen. In 2007, Lordanos presented a large number of horses that qualified for the Bundeschampionat. After Lumos' victory in Warendorf in 2004, Light On was a high placed finalist in the class for five year olds in 2007. The top priced Verden auction horse Lohengrin became the Hanoverian Show Jumper Champion and another son won the licensing in Finland. Among Lordanos' other offspring you also find Lord, a successful CCI3*, the multiple Grand Prix winner Laokoon, Loriot, winner of the Italian Show Jumping Championships, and Lord Sandro DDH, the Oldenburg Vice Champion under Ulli Kirchhoff.

In Verden he presented the jumping second Reserve Champion and in Oldenburg a premium stallion sold for €125,000 along with another licensed son. The number of licensed Lordanos sons has meanwhile risen to more than 60. In Switzerland, one of his foals won the Championships of Avenches. Let's Fly has been a very successful international jumper under Rodrigo Pessoa, while in 2010 Lex Luger won the Hamburg Jumping Derby. Adriano M, Lazzaronne and Le Rand are top grand prix horses around the world.