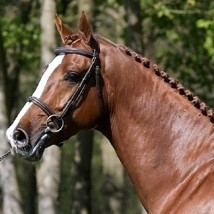 
Terms - €900 + VAT for unlimted attempts with chilled semen on one named mare in one breeding season. If the mare is certified not in foal by the end of September, €600 will be refunded.

About & Performance - Justice is the 2017 KWPN stallion performance test champion and is a son of the acclaimed stallion Harley. Justice was approved by KWPN scoring one of the highest total points ever. On all subcategories this stallion scored 8.5 or higher. For character he scored a 9.0 and for rideability a stunning 9.5! The performance test report talks of a reliable, uncomplicated stallion with a great character and a willingness to work and perform. In addition his canter is light-footed and balanced. He has a great front-and hind technique, is very careful and has a lot of athletic scope.

Sire - He had exemplary show results with Jessica Kuerten. At the KWPN stallion licensing in 's-Hertogenbosch he won the VHO Trophy, and at the same show he won the 1.35m Stallion Championship. He has also won international classes at La Coruna, Aalst and Gelderland. He was second in the Sainte Cecile Grand Prix and took third place in the Neurenberg Grand Prix. In competition there are some striking results by his offspring: Carst VDL won multiple classes for five-year old jumpers during the WEF and was the highest-ranked five-year old jumper of the USEF rankings. His oldest crops are already successful at international level; Harley's Hero VT won the Grand Prix of Wiener Neustadt, Harley David won a Grand Prix in New York, Arlando was 4th in the GP Geesteren and won the Nations Cup in Drammen. Camelot was 5th in the GP Roosendaal, Cupid was 7th in the GP Drammen and Hidalgo was 6th and 9th in the GP Verona. Cupido finished 6th In the Dutch Championship of 5 year olds and with a sale price of €200,000 he was the price highlight of the Dutch Sport Horse Sales, while Harley's daughter Cloe was sold in the same auction for €165.000.

Damline - His dam Nobless Oblige, a daughter by E-Pilot who herself obtained excellent notes during her mare ability test. She in turn is also dam to the elite mare Coblesse who was awarded with a highscore of 81.5 points for her ability test. Dam sire Epilot was a successful 1.40m showjumper who is now the sire to 5 licensed sons, 2 elite preferent mares and 5 keur mares. His second dam sire Pilot needs no introduction as from his first public appearance at a foal show he had the attention of many due to his elegant frame and great conformation. Pilot was the first stallion with progeny to earn the huge amount of €250,000. He has also sired Wolfgang who was the gold medal winning horse in the German showjumping Team at the Seoul Olympics in 1988.