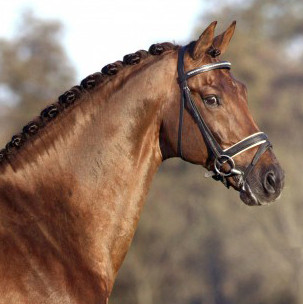 About - Jazz needs almost no introduction; a world-leading sire of grand prix horses, Jazz is found in the pedigree of an enormous number of top sport horses and stallions, and is recognised as one of the most influential dressage stallions in modern history.

Performance - Jazz competed successfully at Grand Prix level with both Tineke Bartels and Kirsten Beckers, including at the 2002 World Equestrian Games in Jerez.

Sire - Olympic Cocktail was awarded Horse of the Year in 1995 and proclaimed a Keur stallion in 1999. Uder Anky van Grunsven he won an incredible number of grand prix classes, including on the World Cup circuit. His sire Purioso is a son of the leading German stallion Furioso II. Furioso II, who at least has 70 approved sons, influenced breeding world wide. The full brother of Purioso II is the French stallion Mexico, whose son Le Mexico is a familiar name as a producer of sporthorses in the Netherlands.

Damline - Jazz's full brother Klister competed to small tour level, and the damline has produced the international grand prix horses Adamo and Loverboy, plus a host of other small tour horses and several keur mares.

Progeny - Jazz's offspring speak for themselves. In 2018, the KWPN reported that Jazz had 666 offspring in sport at Z1 (UK medium equivalent) level, streets ahead of his nearest rival, Gribaldi, with 477. He also led the rankings for the most grand prix horses, with 131 (4.2%), with Contango trailing behind with 24 (3.8%).

His grand prix offspring include Olivi, Jerich Parzival, Vancouver K, Johnson, Wynton, Westpoint, Chagall, Don Olymbrio, and Toots. Parzival is the most successful, dominating the international grand prix scene for many years under Adeline Cornelissen. Parzival was the 2011 European Champion, back-to-back winner of the 2011 and 2012 World Cup Finals, and has no fewer than 14 championship medals to his name. Jazz's younger son Wynton is one of the leading stallions in Holland, being awarded the Keur predicate in 2018, and Glock's Johnson was team gold and individual bronze medallist at the 2015 Aachen European Championships. Jazz has over 50 other licensed sons, including Don Juan De Hus, Westpoint, Desperado and T-Movistar.

Jazz offspring are known for their talent, expression, and reactivity; he suits a wide variety of mares but would not be best suited to a very small, spooky, or electric mare. His progeny have proven themselves to be enormously successful at top level, and he has been in the top 10 of the WBFSH Sire Rankings for ten consecutive seasons, leading from 2008-2012.