The great son of Douglas with a true sports dam line. 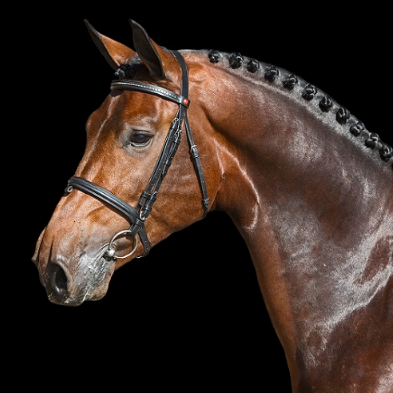 
Terms:  €1000+VAT for unlimited attempts with chilled semen, for one named mare in one breeding season. If the mare is certified not in foal by the end of September, €700+VAT will be refunded.

About - Impressive already lives up to his name as quite an impressive son of the foundation sire Douglas. Impressive has size, power and unlimited scope. Through his sire Douglas the valuable genes of Darco and Capitol I are secured in his pedigree, which only strengthens Impressive’s best features.

Performance - With a wonderful score of 82.5 points, Impressive was approved by the KWPN. In the KWPN Performance Test, the son of Douglas was praised for his scope, mentality and reflexes, for which he earned three 8.5’s. His talent as a show jumper was also awarded the same 8.5. With his scope and power at the jump along with his great reflexes, Impressive is a great asset for the breeding of show jumpers.

Sire - Douglas has developed into one of the most successful sons of Darco over the past years. Offspring such as Dougie Douglas, Guru, Suma’s Zorro, Dassler, and Carneyhaugh Manx perform at international Grand Prix level. Impressive’s grand sire Contender needs no further introduction as one of the most influential sires of Holstein of the past decades. Both Corofino and Lord have been indispensable for the current breeding of show jumpers as well. Impressive’s dam line is filled with successful show jumpers and approved stallions.

Damline - Dam, Atendri, ‘provisionally Keur’ and ‘Preferent’ by the KWPN, is also the mother of Easton VDL, who competes with success at 1.45m level in Australia. Atendri is the half-sister of Corrido – an approved stallion by the Holsteiner Verband and an international show jumper with Nisse Lüneburg, of Dirk Ahlmann’s international Grand Prix show jumper Prestigious and of Salina IV – the dam of Jos Lansink’s For Cento, Philipp Schober’s Quinta and the approved stallion Quidman Denfer of Thomas Velin. The KWPN-approved Fernando, who was 4th in the Grand Prix of La Baule with Johnny Pals, the powerful Grand Prix show jumper Cocodrillo and the AES Stallion Show Champion Goodluck VDL are all closely related to Impressive as well.