A modern and elegant son of grand prix stallion Wynton 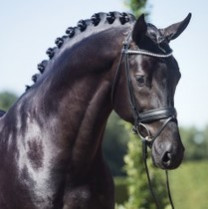 
Terms - €1500+VAT for unlimited attempts with chilled semen, for one named mare in one breeding season. If the mare is certified not in foal by the end of September, €1250+VAT will be refunded.

PLEASE NOTE - Imposantos is collected on Monday, Wednesday, and Friday each week, for delivery Tuesday, Thursday, and Saturday. These days are subject to change; please confirm prior to ordering.

About - Imposantos is an elegant young son of Wynton, who was awarded the keur predicate in 2018 in recognition of his contribution to both sport and breeding. Imposantos is a tall and modern stallion with plenty of strength and substance over the topline, in particular with a fantastic, powerful hindleg.

The KWPN report stated: "Imposantos is an honest, reliable and uncomplicated stallion. The stallion has a lot of willingness to work, the step is pure, active and very good in space. The trot is expressive, good-natured with an active and powerful hindleg that comes well underneath. The canter is powerfully uphill with a lot of support and space. Imposantos moves with a very good attitude with a lot of balance and body use. Imosantos has a lot of talent for dressage and gives his rider a very good feeling".

Performance - He was the easy winner of the 2017 performance test in Ermelo, scoring 8.5 for canter and a 9.0 for all other marks, for a score of 89 overall. He was also third in the PAVO Cup as a four-year old, having won the VSN Trophy as a three-year-old under Bart Vrees. He was placed fifth in the World Cup Six year old class in Ermelo in 2019, he also won the Pavo Cup that same year. He has also won the  Anemone Stallion Competition three years in a row from 2018 to 2020.

His sire Jazz led the WBFSH Sire Rankings for four consecutive years (2008-2011) and has never been out of the top 10. He competed at the 2002 World Equestrian Games, and his sons still lead the sport - Jerich Parzival was 2011 European Champion and World Cup Final winner, Wynton is one of the leading young stallions in Holland, and Glock's Johnson was team gold and individual bronze medallist at the 2015 Aachen European Championships. Jazz has over 50 licensed sons, including Don Juan De Hus, Westpoint, Desperado and T-Movistar.

Damline - Imposantos' dam is an elite mare whose first stallion son was accepted to the second round at the KWPN licensing. Her dam also produced the licensed stallion Landeur, and the grand prix Jazz daughter, Tarina, in addition to a 1.55m jumper by Baloubet du Rouet. The grand prix horse Ideaal is also descended directly from this mare line.