Impressive in type and conformation 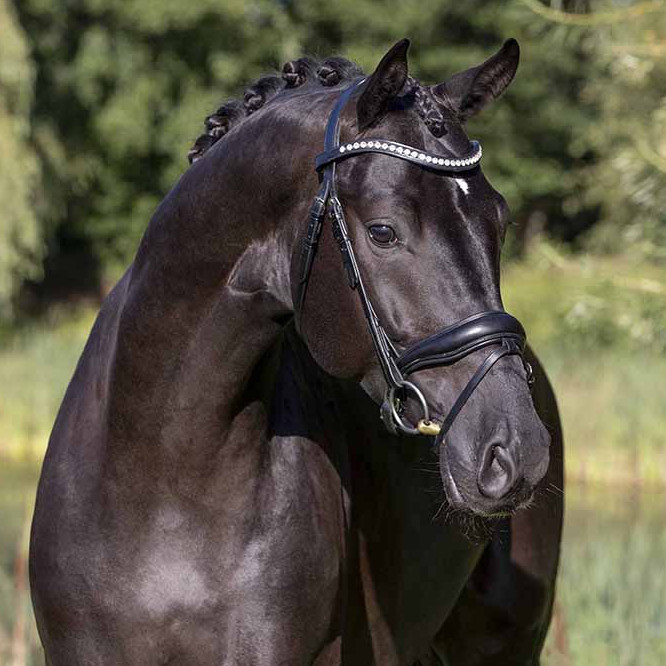 
Terms - €1000+VAT, allowing unlimited attempts with chilled, for one named mare in one breeding season. If the mare is certified not in foal before the end of September then a 50% credit applies the following year to spend on any stallion from the same stud. If the first AI of the year is July 1st or later, the credit the following year is 100%.

About - The incredibly long legged Freetown also has remarkable shoulder freedom, a high degree of suppleness and  powerful hindquarters.  Licensed in Oldenburg in 2019, this remarkable talent was given sufficient time to mature physically, so in 2020, he completed his stallion performance test in Denmark with expected highlights in terms of basic gaits and willingness to perform. In 2021, he received a 9.4 for trot, an 8.7 for walk, an 8.5 for canter, a 9.0 for rideability and an 8.8 for overall impression in the finals of the Danish Dressage Championships for four-year-olds. With an overall score of 8.8, he ranked fifth in a strong field.

Sire- His sire, Fürst Wilhelm, was victorious up to Intermediaire I and was singled out as a VTV dressage stallion in 2017. Among his twelve licensed sons is the sire of our champion stallion Forever Love, the HLP winner and Youth DM fourth place finisher Fair Game, and the 2015 Bundeschampion of Riding Horses, 2017 Vice Bundeschampion of Dressage Horses and Intermediate II successful Fürst William OLD.

Dam - The dam is the Hann.Pr.St. Schöne Aussicht who's sire Sir Donnerhall I has made the jump to fourth place among the world's best dressage sires according to the WBFSH ranking. Himself second reserve winner of his licensing, state champion, HLP record winner, vice dressage horse world champion and Bundeschampion as well as main premium winner, he can point to more than 100 licensed sons. The grand dam St.Pr.St. Latiffa AC also produced the advanced (S) level dressage winner Wynton's Son (by Wynton)/Thomas Wagner and the medium (M) level dressage winners Stiene von der Weide (by Sir Donnerhall I) and Shiraz (by Soliman de Hus). Latimer and Feiner Stern follow in third and fourth place in the pedigree.

The third dam, St.Pr.St. Flic Flac, produced the mare St.Pr.St. Daireen (by Donnerhall). She was the dam of the Hanoverian Champion Stallion and prize record holder His Highness (by Hohenstein) and the advanced (S) level dressage horse Summertime (by Sandro Hit). Flic Flac himself is a half-sister to the licensed and Intermediate I-winning Donnerprinz (by Donnerhall).