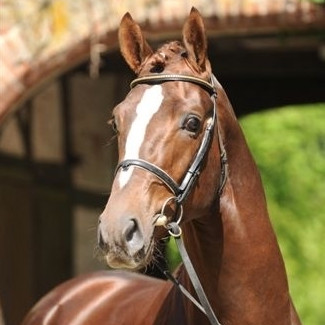 
Terms - €1400 + VAT for unlimited attempts with chilled semen for one named mare in one breeding season. If the mare is certified not in foal by the end of September, €1100 + VAT will be refunded.

About - Floriscount is a beautiful stallion with not only three outstanding paces, but also an exceptional temperament and rideability that is passed on to his offspring. He moves with freedom and elasticity, over a good topline and strong hindleg.

Performance - Floriscount dominated his competitors at his performance test, winning the dressage index with scores up to 10.0 for rideability and his canter. In 2010 and 2011 Floriscount achieved numerous victories and placings in test for young dressage horses, and qualified repeatedly for the Bundeschampionat. Under Christoph Koschel he added his first placings in advanced level dressage classes at the age of only seven. In 2014, Oliver Oelrich continued his further training and collected victories and placings on international level. The pair won both PSG classes in Verden and in doing so qualified for the final of the Nürnberg Burg Trophy as well as the Inter I competition in Nieuw en Sint Joosland, where he placed second in the PSG and third in the freestyle competition. Further placings with the best followed in Hagen and Balve. Floriscount is now on the way up to grand prix with his owner's daughter, Patricia van Merveldt.

Sire - Florencio I was a double World Young Horse Champion (2004-05) with a record winning score of 9.8. In 2009 he won the coveted VHO Trophy at PSG level, and was the winner of the 2004 Hauptprämie, awarded for the best first crop of foals. He sired more than 40 licensed sons before his untimely death in May 2016. As his most succesful son, Floriscount is an ideal choice for breeders looking to add the Florencio family to their breeding programme.

Damline - The dam, elite mare Arkona, is also the dam of the premium stallion Sandakan (by Sandro Hit), who is stationed at the Swedish National Stud in Flyinge, and Floriscount's full brother Florimax, who received a premium in Mecklenburg in 2009. Damsire Donnerhall, is a foundation sire and undeniable legend, who represents the perfect synthesis of breeding and sport and whose influence has been overwhelming. The grand-dam, state premium elite mare Arwaldis, was the 1991 Oldenburg Reserve Champion Mare.

Progeny - His debut as a sire was a sensation and everyone talked about his foals - strong in type, and beautiful movers with good characters. All over Germany, they won foal shows and brought top prices at the Verband auctions. In the UK, Floriscount was the leading dressage sire of BEF foals, with all of his foals gaining a premium; his son Cathmor Florian was the top scoring two-year-old dressage horse in the Futurity series in 2012, and reserve champion at the BWBS stallion licensing. In Hanover, his three sons presented at the stallion licensing were all approved, with one being awarded a premium and selling for €87,000.