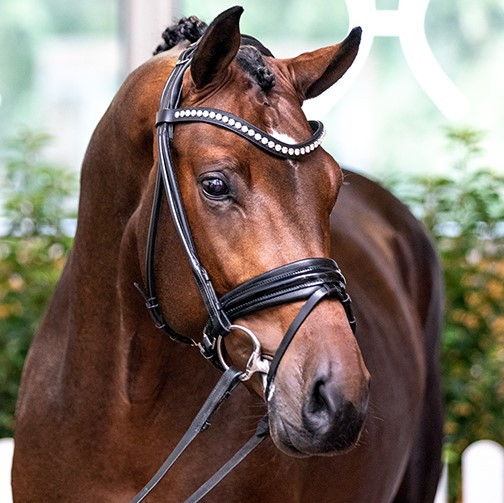 
Terms - €900 + VAT for unlimited attempts with chilled semen, on one named mare in one breeding season. If the mare is certified not in foal before the end of September, a 100% credit will apply for the following season to use on any stallion from the same stud.

About & Performance - A new ultra-modern young stallion who impressed the crowd at his licensing in 2020. His striking appearance, three outstanding basic gaits, elasticity and light movement are just the start of what this stallion has to offer. He presents himself with a great amount of expression which grasps the attention of many.

Sire - Farrell is the ultimate producer who was approved as a premium stallion for Danish Warmbloods in 2014. Unfortunately, he broke a leg after that breeding season and was thus prevented from passing the 35-day test, which meant he could not get his approval renewed for 2015. He successfully recovered and returned as a 4-year-old to pass the 35-day test in autumn 2015 with 856.5 points, including 9 for trot and 9.5 in rideability. Rider Nanna Skodborg Merrald and Farrell made their competition debut at the Blue Horse Dressage Festival 2019, taking top placings in MA and Prix St. Georges. It went with 72.807% to victory in Prix St. Georges.