A top quality German Riding Pony with sportiness and character 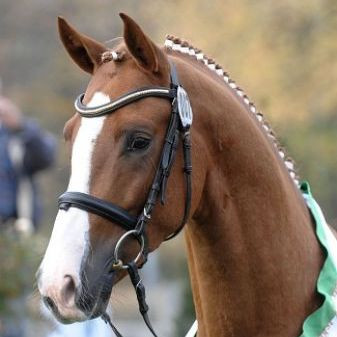 
Terms - €700 + VAT, allowing unlimited attempts on one named mare during one breeding season. If the mare is certified not in foal before the end of September, €350 + VAT will be refunded.

About - This young stallion combines everything his pedigree promises: movement at its best, an excellent work attitude, elegance, sportiness and character!

Performance - Numero Uno was the winner of his licensing in 2011 at Wickrathberg, winner of the NRW Championships in 2013 and 2013, and winner of the Bundeschampionat on a score of 9.5.

Sire - His father Noir de Luxe was Champion Stallion in Hanover and Bundeschampion in both 2007 and 2008.

Damline - The mother St.Pr.St. Dancing Diamond FS won the Elite Mare Show in Wickrathberg in 2004 and was a Bundeschampion as a three- and four-year-old. Not only that, but she, her mother and her grandmother won the 'family' division of this show. Dancing Diamond's son FS Cannavaro (by FS Champion de Luxe) is also licensed. Her daughter St.Pr.St. Cinderella (by FS Champion de Luxe) was champion mare of the elite mare show in Wickrathberg and won bronze in the same year at the Bundeschampionat. Damsire FS Don't Worry has been described as the "Donnerhall of German Riding Ponies" and has dominated the breeding scene for many years.