Following in the footsteps of his father! 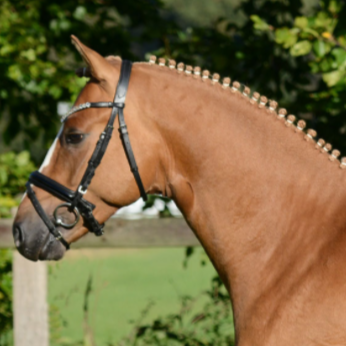 
Terms - €600 + VAT, allowing unlimited attempts on one named mare during one breeding season. If the mare is certified not in foal before the end of September, €300 + VAT will be refunded.

About & Performance- Coming from the highly successful Karl Dercks stables, the champion stallion of the Rhenish riding pony licensing 2018 is expected to be very successful in sport too. In addition to victories and placements in riding pony and dressage horse tests in 2020, FS Don Juan de Luxe became a celebrated NRW champion at the 2019 junior meeting and was a finalist at the Bundeschampionat in Warendorf 2019.

Sire - Don't Worry was the Reserve Champion of his Riding Pony Stallion grading in Aachen, winner of the NRW Championships in 1998 and 1999 (scoring six 10s), winner of the Rhenish Reitponychampionates 1998 and 1999, and winner of his performance test in Münster-Handorf. He won dressage classes up to intermediate I level and has led the pony sire rankings for many years. He scored +78% to win an international pony class at Saumur.

Damline - Dam Delilah delivers the best performance blood in terms of sport and breeding via the European champion Dornik's Donovan , FS Cocky Dundee and Golden Dancer , as well as valuable blood connection via Conquistador in the fifth generation.