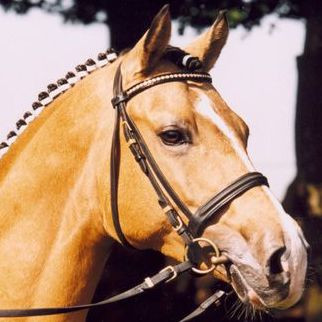 
Terms - €700 + VAT, allowing unlimited attempts on one named mare during one breeding season. If the mare is certified not in foal before the end of September, €350 + VAT will be refunded.

About - Champion De Luxe is a quality pony stallion, very rideable and with an excellent temperament.

Performance - FS Champion De Luxe was the impressive winner of the 2000 riding pony koering in Aachen, winner at the NRW meetings of 2001 and 2002, and the Rheinisches championship. He has competed and won level A and L dressage classes and was pony Bundeschampion of 2001 and 2002. He won his stallion performance test in Neustadt-Dosse with four perfect scores of ten! At the Berlin Bundessiegerhengst in 2003, he won the both dressage and versatility classes, prompting Hans Heinrich Stien to write in the press that Champion de Luxe is an "exceptional, superior animal."

Progeny - FS Champion De Luxe has a 50% chance of passing on the cream gene; on a chestnut base this will produce palomino, and on a bay base will produce buckskin. His offspring have been truly exceptional, with many of his progeny having been championship winners, gold medallists, and high priced auction foals. He has sired more than 90 approved sons and 30 State Premium mares. Among these are countless Champion Stallions and Champion Mares.  He is the sire of the Bundeschampions FS Dark Surprice, C-Dur, Cara Mia, FS Companiero, Championess, and Casino Royale K. His son NK Cyrill has appeared on the German Pony European Team twice, taking home team and individual silver on both occasions. At Malmö 2015, NK Cyrill took home the silver with another Champion De Luxe son, picking up bronze in the individual test and fourth in the freestyle. His progeny have won over €100,000 in prize money.