Athletic, powerful stallion and producer of many champion foals 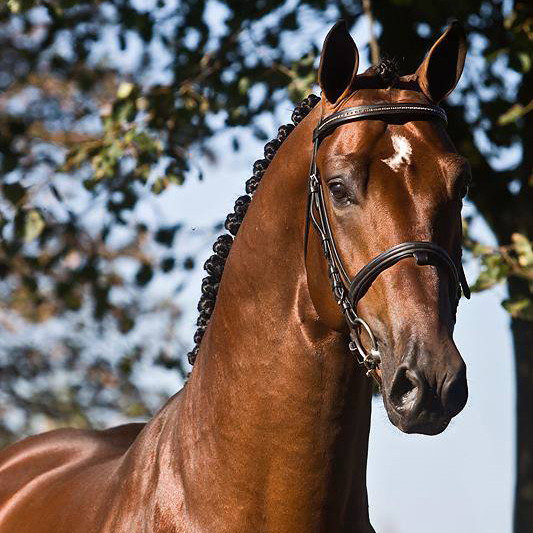 
Terms:  €1500 + VAT for unlimited attempts with frozen semen for one named mare in one breeding season. If the mare is certified not in foal by the end of September, then a €1200 + VAT refund applies.

About - Etoulon VDL is a modern and beautiful type of stallion with much charisma. He is currently much sought-after in the breeding world

Sire - Toulon descends from the Preferent stallion Heartbreaker, a successful Grand Prix jumper and notable sire, who won the Grand Prix of Sao Paulo, came 2nd in the Nations Cup of Rome and was placed in many Grand Prix and World Cup Qualifiers. Toulon has more than 50 offspring jumping at grand prix level, including Bijou Orai, dam of licensed stallion Eldorado.

Damline - Damsire Calvados is a proven sire of Grand Prix jumpers. The stallions Le Mexico and Lucky Boy xx are among the foundation stallions of the modern KWPN horse. Offspring of these stallions have demonstrated their brilliance worldwide such as Royal Future, Van Gogh, and Silvano. On the dam's side of Etoulon are proven mares. Elite dam Utareusa is also produced the Keur and Sportmare Atureusa who competes at 1.35m level. Grandmother is the state premium mare Brigitte, who produced two national jumping horses as well as being granddam of the Grand Prix jumper Tereusa. More international jumpers from this dam line are: Sundance Kid, Pitareusa, Itareusa and Oteusie.

Progeny - At the Dutch Foal Championship, Etoulon provided the champion foal three years in succession; Imagine H (2013), Javinille (2014) and Korinchidee (2015). He also had several foals placed in the top six in these years. Etoulon’s offspring stand out due to their reflexes, scope and wonderful way of jumping.