A powerful and elastic son of Estobar NRW 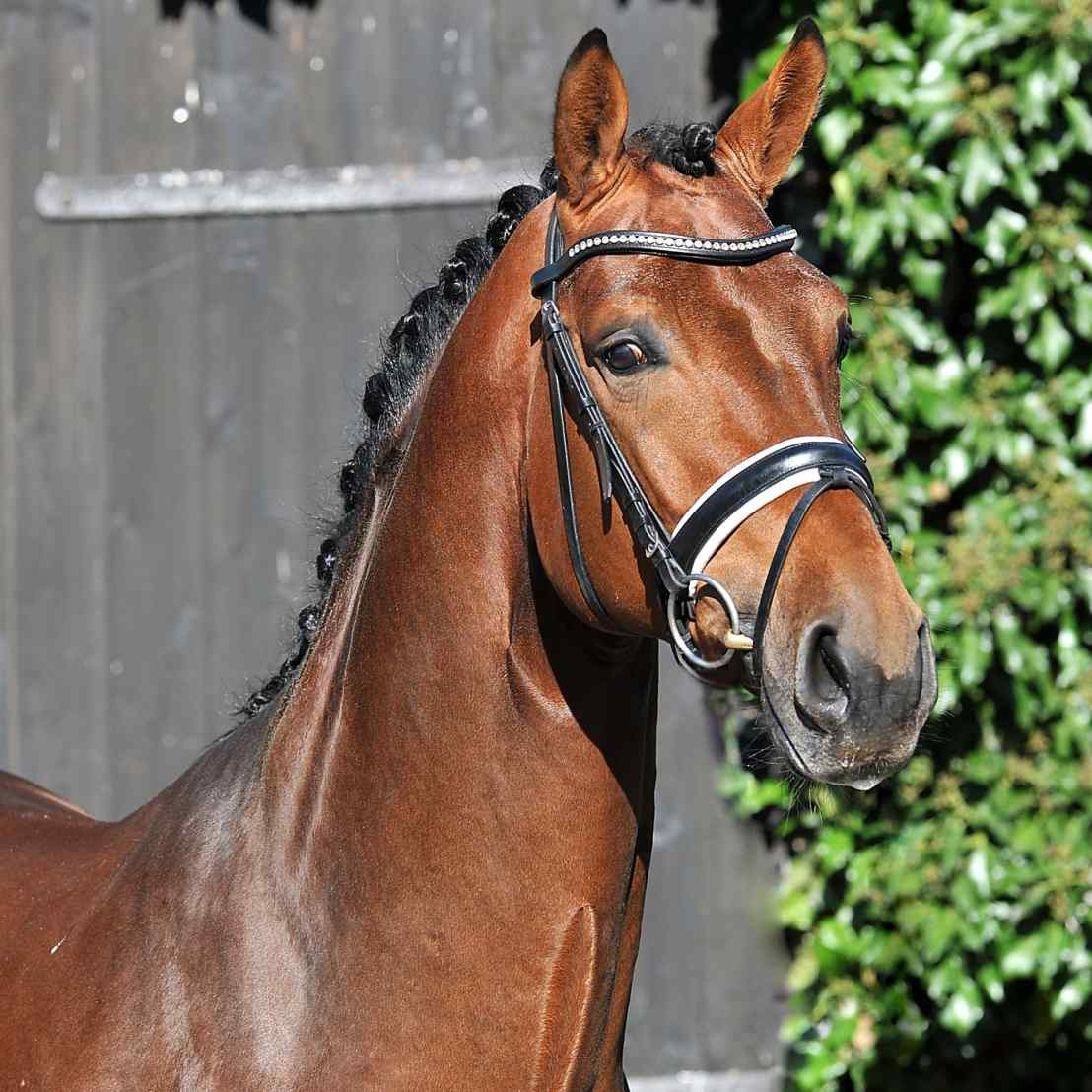 
Terms - €2000+VAT for unlimited attempts with chilled or frozen semen, for one named mare in one breeding season. If the mare is certified not in foal by the end of September, €1200+VAT will be refunded.

About - Escolar has been the talk of the breeding world in recent times, thanks to both his outstanding sport performances, and his up-and-coming offspring. He is a tall, large-framed, and powerful stallion, with expressive, ground-covering movement.

Performance - In 2012 Escolar made his debut at shows with results that would be hard to beat, winning one class after another, in Lingen, Cloppenburg and Münster-Handorf, where the judges didn't hesitate to give the highest possible score of 10.0. Just decorated with the Westphalian champion title, Escolar and his trainer, Hermann Burger, went to Warendorf where they took the Bundeschampionat title for three-year old stallions.

Escolar made his international debut at Aachen CDI4* in 2016, scoring over 73% in both the PSG and Inter I classes to finish fourth and second. In 2017, he returned and scored +70% again. In 2017 Escolar was second (and crowd favourite) of the finals of the Nurnberger Burgpokal trophy on over 77%. In 2020, at the age of ten, the Escolar was nominated for the Tokyo Olympic squad under Hubertus Schmidt; meanwhile, his offspring caused a sensation.

Sire - His sire Estobar was the champion of the 2006 Westfalien licensing, selling for €535,000, and competed up to grand prix. He is the full brother of licensed stallions Eichendorff and Ehrendorf, who also both competed at the highest level. Their sire Ehrentusch was famed for his temperament and rideability and also produced the state stud stallion Ehrentanz. Ehrentusch was the champion of the 1987 stallion performance test at Warendorf, finishing first in both the dressage and jumping sections. At the 1989 DLG show in Frankfurt, he was reserve only to Weltmeyer. The 'E' Line has produced a number of successful sport horses in both jumping and dressage, and Ehrentusch's full brother was Klaus Balkenhol’s international dressage star, Ehrengold.

Damline - Escolar's dam is by the popular Fürst Piccolo, a son of the great Fidermark I. Fürst Piccolo competed to small tour, and is out of the same mare as the licensed stallions Fürst Fohlenhof and Brioni Pur. He has already sired several grand prix horses and has more than a dozen licensed sons including Furst Kiss and premium stallion Fleury. The damline has produced many good sport horses including the grand prix horse Dressman 55. Escolar's full brother Escoril is also competing at small tour.

Offspring -  26 sons have now been licensed. Above all, the Westphalian reserve champion Escalito and the premium stallions Emilio and Escamillo should be mentioned here, but also Erdinger, the popular darling of the public in Oldenburg. 33 daughters have now been awarded the state premium and have completed outstanding mare performance tests, including Escolar's large contingents at the Westphalian elite mare shows, including Emilia Louise and Etiennette, the first and second reserve champion of the year, in 2018.

In 2018 nine of his offspring ended up in the medal ranks of three and four year old stallions, The son Eternity was state and federal champion in 2017 and again placed finalist in Warendorf in 2018. The daughter Eyleen was third in the state and federal championships and in 2017 at the top of the auction in Münster-Handorf and achieved international series victories under Yvonne Kläre in 2020 at the age of six.

In 2019 Enrico was the Westphalian Champion under Lukas Fisher and Escorial Q was Bundeschampionat of five year ols dressage horses. In 2020 16 offspring qualified for the Bundeschampionat. Eternity became Danish Vice Champion of 6-year-old dressage horses and was named for the World Championships like 5-year-old Escamillo. His offspring life winnings are now an impressive 31,502.00 euros.