A pedigree in perfection with the best riding horse characteristics! 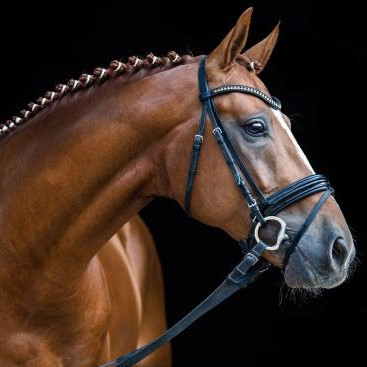 
Terms: €850 +VAT for unlimited attempts with chilled semen for one named mare in one breeding season.  If the mare is certified not in foal before the end of September then you get a 50% credit the following year to use on any stallion from the same stud. If the first AI of the year was 1st July or later, then the credit in the event of non-pregnancy is 100%.

About - Dohnanyi impressed with his quality at the 2016 stallion market in Verden. With an excellent walk, outstanding mechanics in the hindquarters, and excellent type, he is a stallion of the highest calibre. This strong moving chestnut is also ahead genetically,  the performance of De Niro progeny is without question, both in terms of sport and breeding, and in Dohnanyi they are paired with the legendary and valuable blood of Lauries Crusador xx.

Performance - The results of his stallion performance test 2018 confirmed his outstanding qualities under saddle, trot 8.4, canter, 8.5, step 8.5, rideability 8.0, overall impression 8.5, and total score 8.33. His start to his tournament career couldn't have gone better. After the outstanding victory in the Hanoverian Riding Horse Championships of the 3-year-old stallions in Verden, he also won the bronze medal at the 2017 Bundeschampionat in Warendorf!

Sire - De Niro was 1997 vice champion of the stallion performance test in Adelheidsdorf. In 2002 he was victorious at grand prix and grand prix special in Samur and Berlin. 2004 produced the champion stallion Dancier at the licensing in Verden. 2006 with 14 descendants at the German National YHC, De Niro provided the largest contingent. 2007, De Niro's son Deveraux became World Champion of the six-year-old dressage horses in Verden. In 2012, De Niro was ranked first in the ranking of the World Breeding Federation for Sports Horses. In 2018, the overall amount of prize value of De Niro's descendants reached 3,000,000 Euros.

Damline - His grandmother Rubina and her father Rubinstein I, leads another star sire for the highest rideability in his genes. Dam sire Lauries Crusador xx  has been one of the most influential Thoroughbred stallions ever licensed by the Hanoverian Verband. Born in Britain, Lauries Crusador had a successful career in racing before moving to Germany to stand at the state stud until he died aged 28. In 2006, not only did he provide both the champion and third placed colt of the Hanoverian licensing, but he also became the first non-Hanoverian stallion to be proclaimed Hanoverian Stallion of the Year, in recognition of his outstanding achievements in breeding. With over 2,500 foals, Lauries Crusador has over 50 licensed sons and hundreds of state premium daughters, among them the grand prix dressage horses Le Bo, Lesotho and Le Primeur. Apart from Londonderry, he also produced the renowned stallions Lancier, Longchamp and Laurentio.