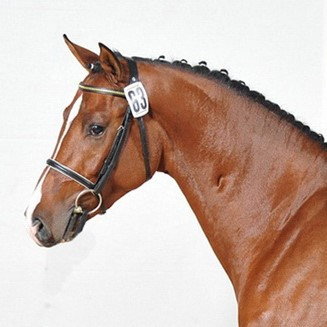 
Terms - €1150 +VAT for unlimited attempts with chilled semen on one named mare in one breeding season, if the mare is certified not in foal by the end of September €850 +VAT will be refunded.

About - Dinken embodied the perfect type and great athleticism when presented at Neumünster. Already his expression as a very modern young stallion was in a class of its own. He has ideal frame and a perfectly constructed top line with a strong back and very good proportions. His legs are very correct and in good proportion to his body. His basic gaits are excellent throughout and emphasize his athletic energy. He demonstrates his quality in particular over the jumps, this Diarado son can be rated an exceptional talent.

Sire -  Diarado is one of the most popular stallions amongst both jumping and eventing breeders, famed for his outstanding conformation, temperament, and soundness.  Diarado has won several show-jumping classes; in 2010 he won the qualifier at the Bundeschampionship with a mark of 9.3, and in the final, he won the Bronze medal (with two marks of 9.0). To date, he has regularly been highly placed at advanced level, and came third in the CSI3* Grand Prix at Dobrock. He has been retired from sport for no other reason than to focus on his breeding career - he is sound and fit and still regularly appears at stallion shows. His sire Diamant de Semilly topped the WBFSH Sire Rankings for the second time in 2016, having been inside the top ten since 2012. During his career, he was French national champion and WEG team gold medallist in 2002, and European team silver medallist in 2003. His offspring include Quickly Du Kreisker (FEI World Number One 2015), Don VHP Z (winner of the Rome GCT), Utamaro D’Ecaussines (member of British Nations Cup squad), Hello Guv'nor (winner Aachen 2016), and Helidor Hybris, who jumped national grand prix as a 7-year-old. Diamant de Semilly is known for his outstanding power, suppleness and balance.