A beautiful, elegant son of the world-renowned Vivaldi 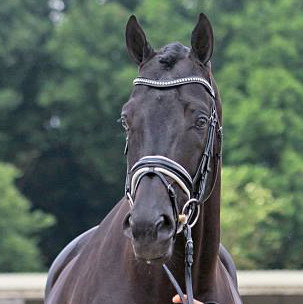 About - Desperado is an honest and reliable stallion with a very good attitude. He has a real willingness to work and was the highest scoring stallion in his performance test  with 89.5 His trot is uphill with good use of the foreleg and the canter is powerful, uphill and has good scope. Desperado has a lot of flexibility, a very good attitude and a good balance and adds movement, technique and flexibility to his offspring.

Performance - At his performance test, Desperado scored 89.5, including a 9.5 for the canter. At the World Championships in Verden, Desperado was 7th in the 5-year-old final with a score of 16.6, and 8th in the 6-year-old final on a score of 8.3. He competed successfully at national level at PSG and Inter I. Desperado has made a fantastic start to his international grand prix career including winning Mechelen World Cup Freestyle with +85%.

Sire - Vivaldi competed up to Inter I with Hans Peter Minderhoud, scoring over 72% internationally at PSG. He was reserve champion of his stallion performance test and in 2007 he won the Pavo-Cup of five-year-old dressage horses. In 2008 and 2009, he added triumphs in the KNHS/KWPN stallion series achieving marks of 10.0 for his trot. Vivaldi is trained to advanced level. As a producer, he is now recognised globally; so far, in Germany alone 19 of his sons have now been licensed, amongst them several highly-priced premium stallions. Vivaldi enriched the World Championships of young dressage horses in Verden in 2014 and also in 2015, where his son Eye Catcher won the bronze medal of the six-year-olds. In 2015 and 2016, his son Fenix won the five and six-year-old Pavo-Cup in the Netherlands. The Pavo-Cup of six-year-olds was a real festival for Vivaldi in 2016, when behind Fenix, in second and third place, were First Apple and Fantastique, both Vivaldi progeny. Vivaldi also produced several mare winners at shows and in 2016, he was once again third best stallion of the FN dressage breeding valuation throughout Germany with 169 points.

Damline - Mother Sarita is a successful dressage mare herself, and a daughter of Havidoff (Harpsichord x Farn). She is also the mother of the stallion Chinook, full brother to Desperado, who in 2011 was reserve champion of the Pavo Cup for four-year-olds. Her dam and grand-dam are both state premium mares, and in addition to successful dressage horses this damline has produced grand prix showjumpers as well.

Progeny - Desperado is the sire of four licensed sons, among them the hugely exciting Ibiza (from a Jazz x Contango mare) who blew the audience away at his Oldenburg licensing. His oldest offspring are turning five in 2017, among them several Oldenburg premium foals, and we will watch them with interest.