Silver Medallist of the Bundeschampionat 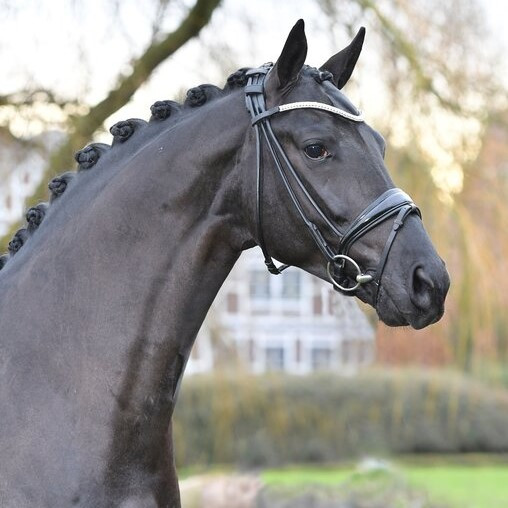 
Terms - €950 + VAT for unlimited attempts with frozen semen, on one named mare in one breeding season. If the mare is certified not in foal by the end of September, you will receive a 50% credit for the following season to use on any stallion from the same stud. If the first AI of the season is after 15th June, your credit in the event of no pregnancy is 100%.

About - Despacito caught the interest of breeders very early on in his career with his stunning appearance and great pedigree. With the clear victory in the Hanoverian Championships in Verden with the dream grade 8.8 and the subsequent win of the silver medal at the Bundeschampionat in Warendorf, he put himself in the spotlight for breeders. As the son of the impressive Don Nobless, out of a dam by Sandro Hit-De Niro-Ehrentusch, his genetics leave nothing to be desired. His love for work and his extremely pleasant nature complete the picture of a stallion, who raises many expectations. This was also confirmed in his 50-day test, which he finished with a very good final score of 8.56.

Sire - Don Nobless competed at the Bundeschampionat as a five-year-old, and he is now successful at international grand prix under Susan Pape; winning his first grand prix special in January 2017 and since picking up a host of placings at the level with scores over 70% and making his first Nations Cup appearance at the CHIO in Rotterdam. His grand-sire Dancier was champion of the 2004 Hanoverian Stallion Licensing in Verden and the 2005 stallion performance test in Adelheidsdorf; after his performance test, he sold for €330,000 to the state stud at Celle. As a young horse, he was reserve champion of the Hanoverian Young Horse Championships, and was third in the four-year-old Bundeschampionat final.

Damline - Second dam Donja produced premium mares Selina and Donata, dam Selina is by the great stallion Sandro Hit who was Bundeschampion and World Champion as a six-year-old in 1999, dominating both competitions from start to finish. Sandro Hit's sons and grandsons pass on his excellent genes and their offspring include many top competition and breeding horses. One of the most outstanding examples is Sir Donnerhall, who also tops the FN breeding stallion rating. Sandro Hit's son San Amour won the Hauptprämie title by a wide margin, while his full sister, Victoria, won the Oldenburg Regional Championship.