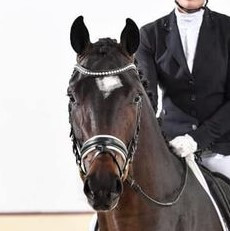 
Terms- €800+VAT for unlimited attempts with chilled semen, for one named mare in one breeding season. If the mare is certified not in foal by the end of September, you will have a 50% credit to use the following season on any stallion from the same stud.

About & Performance - This young stallion is long lined with a lot of harmony throughout the body, correct basic gaits and first-class riding qualities. His temperament is exemplary and he has a constant willingness to learn. He is a fantastic prospect for the sport and for breeding.

Sire - The sire Deparon convinced breeders in 2017 as a bronze medalist at the Hanoverian Championships in Verden and was fourth in the final at the Bundeschampionat in Warendorf. In the meantime he has impressively demonstrated his great sporting potential under Danielle Heijkoop in the advanced classes. In 2018, Deparon U.S. has shown well with Dinja van Liere, and earned a “high” classification several times in the Subli Cup competitions. Deparon’s very striking first foals were born in 2018, after Paul Schockemoehle inseminated a few mares the previous year, resulting in a Champion foal in Lewitz/ Mecklenburg.

Damline - The dam Tosassica already produced a licensed son, Donado by De Niro. Dam sire Totilas was the first horse in history to break the 90% barrier, scoring 90.7% to take home individual and team gold at the 2009 Windsor Europeans. He followed this up with three gold medals at the 2010 Kentucky World Equestrian Games, having also scored 92.3% at Olympia 2009 to set a record that would stand for four years. In 27 appearances at international grand prix with Edward Gal, Totilas scored over 80% on 24 occasions. The pair won three World Cup qualifiers and then the World Cup Final as 's-Hertogenbosch on a score of 89.8%. Under Matthias Rath, Totilas was part of the silver medal-winning team at thr 2011 Rotterdam Europeans and finished fourth individually. On his only appearances against Valegro (at Aachen 2014), Totilas was the undeniable victor; winning both the grand prix and the grand prix special on 82% and 84%.