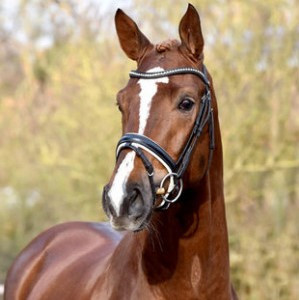 
Terms-  €1300 + VAT, allowing unlimited attempts with chilled semen within the season on one named mare. If the mare is certified not pregnant by the end of September, then a 50% credit applies the following year to spend on any stallion from the same stud. If the first AI of the year is July 1st or later, the credit the following year is 100%. If the following year also results in no foal, the credit for the next year will be 50% or 100% (depending on the date) of the top-up fee paid in the second year only.

About - With his sporty appearance, Damaschino captivates with his type and looks, as well as with his large movements, his long legs emphasizing them further. Based on the line of formative Trakehner mare Donauquelle from the Klosterhof, Damaschino links together all successful stallions of our station, namely the Grand Prix Champions Caprimond, Fidertanz and Danone.

Performance - In 2019, Damaschino became German National Young Horse Champion of the three year old stallions with an overall score of 9.3 points and 10 points for his schooling. He finished his 50-day stallion performance test in Schlieckau as champion, with an overall score with dressage emphasis of 9.35 points, 10 points for the overall impression and 9.75 points for his rideability. In 2020 Damaschino was runner up in the German National Young Horse Championships of 4 year olds with the total score of 9.4. In 2021 he was placed 6th in the finals of the World Championships of yound dressage horses with a final score of 9.1.

Sire - Danone was the finalist of WCYH in 2006, in 2009 his son Dante Weltino sold for 130,000 euros and was the vice champion of the stallion licensing in Vechta and followed on to qualify for the Olympic Games. In 2012, Danone and Theresa Wahler were victorious at Grand Prix level. In 2014, his sons Desperados, Danönchen and Dante Weltino all qualified for the final of the Nürnberger Burgpokal, and in 2015 Der Kleine Lord competed at the European Championships.

Damline - Elite mare Donauquelle provided in Warendorf the Champion family of all German breeding associations in 1994. The second mother, state premium mare Donaumärchen Il, was runner-up to the National Champion in 1994 and she provided together with De Niro the Hanoverian stallion Donautanz. Donautanz is father of Daktari FBW, who won the Piaff Förderpreis with rider Lisa-Marie Klössinger in 2017 and who became European Champion of the U25 riders.