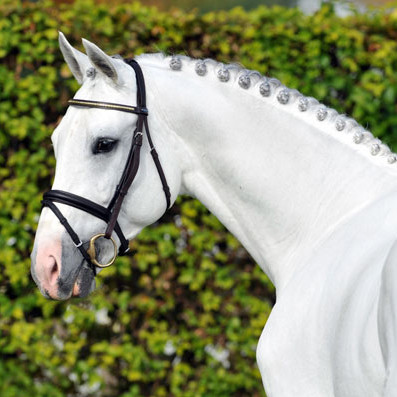 
Terms: €1500 + VAT for unlimited attempts with chilled semen for one named mare in one breeding season; €1200 + VAT will be refunded if the mare is certified not in foal before the end of September and the remaining amount will be credited for the following season.

About - Rarely do we see such athletic ability coupled with breeding capacity so ideally balanced the way it is with Colestus. He is a kind, careful stallion with excellent rideability - he jumps in a snaffle - who is now successful in sport and breeding after an outstanding young horse career.

Performance - Colestus won more than 25 times in young horse classes. In 2012 he won the Westphalian championship for six-year-old horses, and then after two qualifying rounds finished 8th at the Bundeschampionat in Warendorf, and he was also placed in the World Championshipsin Lanaken. In 2013 he earned his first placings on the international Youngster-Tour in Münster, Dortmund, Hagen, Nörten-Hardenberg, and Balve, as well as earning the silver medal at the National Young Horse Championships for seven-year-old horses. In 2014 Colestus received the coveted diamond prize at the south German stallion days in Munich. He then continued competing internationally, placing at grand prix level in Hong Kong, Paris, Verona, Madrid, Olympia and Stuttgart, and the GCTs in Antwerp and Hamburg. After his licensing in 2009 in München-Reim, Colestus stood at stud in the Saxon state stud in Moritzburg, before embarking on his sport career.

Sire - His sire, Cornet Obolensky, is a foundation stallion in the breeding of modern jumping horses, and is currently ranked third in the 2016 WBFSH Sire Rankings. The total earnings of his offspring, including Cornet D'Amour, Cornado NRW, Cornet's Cristallo, Cocoshynsky, Cornetto King, and Comme Il Faut, are over €3.7 million.

Damline - The mare line has also produced the licensed stallions Harry Potter, Wessex and Cassitaire. Damsire Stakkato had an exceptional score of 9.9 at his Bundeschampionat, and headed the German jumping index in 2002 and 2003. After his triumph at the Bundeschampionat, he was sixth in the Youngster Final in Spangenberg (2000), third in the Frankfurt Grand Prix (2001) and in the Nations Cup of Lummen (2002), and 5th in the Hamburg Ladies Cup (2002). Stakkato is the sire of three licensed sons at the State Stud Celle - the best performing being Stolzenberg, who with a score of 141.88 was the best jumper of his performance test. Third sire Pilot is the damsire of the legendary Plot Blue, winner of the Cannes GCT, the grands prix of Saut Hemès and St. Gallen, third in the King George V Cup and the Aachen grand prix, fifth individually at the London Olympic Games, and 2010 winner of the World Cup Final.

Progeny - Seven of Colestus's sons have already been certified for breeding, among them Colestrus, who was placed seventh at the national championship for young horses, and Colorfox, currently jumping at 1.40m level. He also have 14 state premium daughters, and in 2015 one of his sons from his first crop took ninth place at the final of the national young horse championships for 5 year old horses. Colestus produced Colestico DG, Perelisa, A Grace Lady, Classic Dream, and Carl, who earned the top places in the final of the Leipzig loose-jumping competition. Colmar, another son, won the same prize in 2014.