The best jumping bloodlines combined in one horse 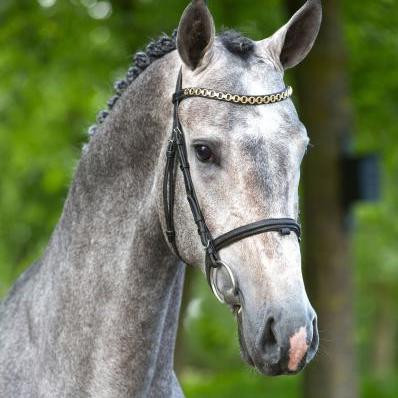 
Terms - €1000+VAT for unlimited attempts with frozen semen, for one named mare in one breeding season. If the mare is certified not in foal by the end of September, €700+VAT will be refunded.

About - Cohinoor has a pedigree to dream of: Olympic world-class sire Cornet Obolensky combined with the true producer of show jumpers Stakkato and the Holsteiner legend Contender, anchored by Hannovarian ‘prestatie’ sire Graf Grannus.

Performance - Cohinoor was approved by the KWPN with a fantastic score of 83 points and was one of the highlights of the KWPN stallion test. Cohinoor scored an 8.5 for reflexes, technique, rideability & attitude and talent as a show jumper. For the remaining jumping components Cohinoor earned 8’s. Cohinoor stands out due to his appealing blood-type and his light-footed way of moving. At the fences, he impresses with his reflexes, technique and easy way of jumping. These qualities are seen in his first sport results: Cohinoor finished as 3rd in the ranking of the stallion competition 1.10m  class. He jumped very steadily with much balance and very good technique. These abilities continued to develop in the stallion competition 1.20m class with clear rounds in Ermelo, De Peelbergen and Zuidbroek.

Sire - Cornet Obolensky competed in the 2008 Olympics at the young age of nine. He is a foundation stallion in the breeding of modern jumping horses, and is currently ranked third in the 2016 WBFSH Sire Rankings. The total earnings of his offspring, including former World Number One Cornet D'Amour, Cornado NRW, Cornet's Cristallo, Cocoshynsky, Cornetto King, and Comme Il Faut, are over €3.7 million. The Clinton/Heartbreaker cross is a proven formula that has produced multiple grand prix jumpers including Cordess and Consul DL Vie Z, and 18 licensed stallions.

Damline - Cohinoor’s dam Sophia, is half-sister to the Westphalian approved stallion Cornwall - Reserve-Champion of the Bundeschampionat for 7-year olds and jumps internationally at 1.45m level. In addition to Cohinoor, Sophia is also dam of the mare Carissma; who received a ‘10’ for her jumping technique and of the approved premium stallion Lanzardo. Great-grand dam Grafin Galexia jumped at the 1.45m level herself. Additionally, the Westphalian and Hanoverian approved Call Me Number One is a son of Cornet Obolensky being bred out of the same dam line as Cohinoor. Call Me Number One jumps at Grand Prix level.

Progeny - The first offspring of Cohinoor are appealing foals with expression; they are well developed with a light-footed canter, remarkable liftoff, suppleness and balance. His first sons to come forward for licensing with the KWPN were outstanding; a collection of modern, athletic, and beautiful colts who were notable for their balance, scope and power. Son Music Maker was Champion of the foal show in Harich, Champion of the CK Friesland and in Ermelo he finished 10th in the National Foal Championship. In 2016 daughter, Lulena, was presented the Champion ribbon at the CK Friesland and finished 8th in the final of the National Foal Championship.