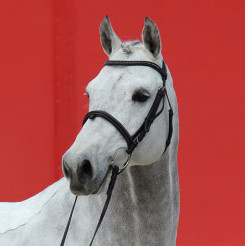 
Terms - Chilled semen €1300 + VAT, allowing unlimited attempts within the season on one named mare. If the mare is certified not in foal before the end of September, €1000 + VAT will be refunded.

About - Cartani has not only the perfect combination of Holstein lines in his pedigree, but also an exceptional damline, proven in both sport and breeding. He has an enormous jump, with an exemplary attitude to his work and an outstanding canter. He is an elegant mover, with very good rideability and adjustability to a fence.

Performance - Cartani has been a linchpin of the Danish Nations Cup teams for several years, jumping at Sopot, Drammen, Gijon, Odense, Aachen, St Gallen, and Rome. At the start of his career, he also jumped for a short time under German ace Marcus Ehning, picking up several placings at 1.45m level. Cartani also competed at the 2013 European Championships under Charlotte Von Rönne.

Sire - Carthago Z was the most influential son of the foundation sire Capitol I. He jumped in two Olympic Games with Jos Lansink, finishing 11th individually at Atlanta in 1996, jumped on winning Nations Cup teams in Rotterdam, Aachen and La Baule, and won numerous grands prix all over the globe. He has over 100 licensed sons, and over 150 offspring jumping at grand prix level. His progeny include Old Chap Tame, Mylord Carthago, Davos, Cappucino, Cash 63 and Coltaire Z. He is also the sire of a CCI4* eventer in Cadoc Z.

Damline - Cartani's dam Taggi, by the Holstein foundation sire Landgraf I, was one of the best mares in the world during her career. She won the team gold medal and individual silver medals at the 1994 Hague World Championships with Sören von Rönne, and she was a member of the German team at the Olympic Games in Barcelona. She was placed in the prestigious Aachen grand prix for four consecutive years. Cartani's full sister has produced Artani 2, a licensed stallion and 1.50m jumper, as well as a 1.40m jumper by Casall ASK. Taggi is also the dam of a 1.45m jumper in Janosch 617, and the mare line has produced several other successful sport horses.