An impressive Holstein stallion with over 55% Thoroughbred blood, bringing athleticism and refinement without compromising on talent 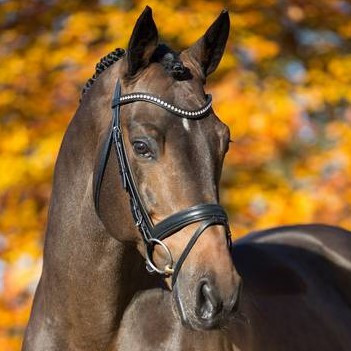 
Terms - €1000 + VAT for unlimited attempts with chilled semen on one named mare for one breeding season. If the mare is certified not-in-foal before Sept 30th, €600 +VAT will be refunded.

About - Canoso is a particularly athletic Holstein jumping stallion. The few years as young stallion in breeding were used decisively by Canoso. He made himself a name as a first-class sire. There  are now  13 advanced (S) level successful offspring on his breeding record, including the internationally highly successful Christiano, competing for Canada under Ian Miller. For Sprehe stud, Campitelli collected ribbons up to 1.50 m classes.

Performance - Canoso completed his 30-day test in Prussendorf in 2008 where he showed off his talents in jumping and received the sensational score of 9.50, which made him the best jumping stallion at the test. Canoso had many wins and placings in tests for in young horse classes, and has repeated this success at international level with placings up to 1.40m. Among others, they placed second in the 2015 grand prix of Groß Viegeln and had a clear round in the grand prix of Munich.

Sire -  Sire Catoki is Philip Weishaput's World Cup horse, winning the Bordeaux leg of the series in February 2011. He was reserve Bundeschampion in 2003, Weser-Ems state champion and won the GP of Rastede in 2006. He has since been passed to young Danish rider Emil Hallundbaek, who piloted him to 5th at the FEI European Junior Championships 2015 and placed many times at 1.50m, a testament to his rideability and talent. Catoki has several offspring jumping at grand prix, including the licensed son Carrico. Catoki's sire Cambridge was also the sire of the Chambertin, who in turn sired the much-praised, but now deceased, Chacco-Blue.

Progeny - In 2012, his first son was licensed in Zweibrücken, followed by further licensed sons in 2013, 2014 as well as in 2015. In 2013 the eldest offspring had their debut in the jumping arena where they were highly successful in young horse classes and he now has many sons and daughters competing internationally demonstrating his  quality as a stallion for jumping.

Canoso’s offspring are distinguished with top jumping-ability, willingness to perform and positive riding values as ideal partner for every demand of both the international top rider and ambitious leisure rider. At Germany’s licensing sites seven Canoso-sons were licensed by now. Among them are the premium stallions Cantinoso and Coal Quidam, who was serial winner of classes for young show jumpers with top scores.