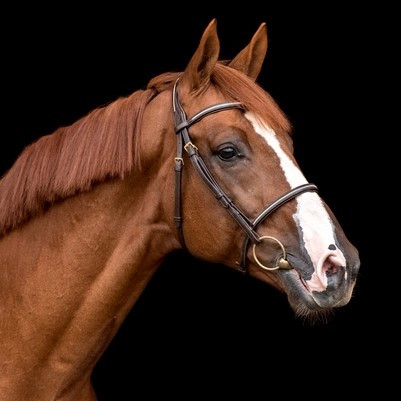 
Terms - €1650+VAT for unlimited attempts with frozen semen, on one named mare in one breeding season. If the mare is certified not in foal by the end of September, €1300+VAT will be refunded.

About - Candy de Nantuel is  turning heads on the national and international stage. His outstanding canter, coupled with his energy, elasticity, blood and temperament are all indicators that this is a stallion who we will hear much from in future. An excellent damline completes the package and makes Candy an exciting prospect for jumping breeders - all seven stallions in the first three generations of his pedigree jumped to grand prix level, while his dam and both grand-dams also had successful sport careers up to 1.40m level. At over 54% blood, he is also one to consider for modern eventing breeders.

Performance - Candy de Nantuel was the highlight of the Fences Elite Auction in 2015, and rightly so - jumping with style, boldness and explosive power.  He received an historic 19/20 at his licensing, and has jumped fantastically in his early career, easily winning the Selle Francais Stallion Masters early in 2017. So convincing is this young stallion, that in his first season at stud he was the fourth most used stallion in France in 2016 - just behind his damsire Diamant de Semilly. In 2017 he was the winner of the Selle Francais Stallion Masters for 5 yro and had 15 / 17 clear rounds with Thomas Rousseau he ended 4th at the French Championship. In 2018 he had13 / 16 clear rounds during his jumping season et ended 9th at the French Championship.

Sire - Luidam had a stellar international career under Ireland's Billy Twomey, winning numerous grands prix including the Samsung Super League in La Baule, the Nations Cups of St Gallen, Dublin and Aachen, second in the grands prix of Dublin, St Gallen, Mauberge, Norten, Hardenburg and the British Open, and shortlisted for the 2004 Olympic Games. He represented Ireland at the 2003 Europeans and the 2006 World Equestrian Games, where the team finished fifth and sixth respectively. Luidam's career was notable from the outset, after he won the prestigious Foxhunter title in 1999 as a six-year-old.

Damline - Damsire Diamant de Semilly topped the WBFSH Sire Rankings for the second time in 2016, having been inside the top ten since 2012. During his career, he was French national champion and WEG team gold medallist in 2002, and European team silver medallist in 2003. His offspring include Quickly Du Kreisker (FEI World Number One 2015), Don VHP Z (winner of the Rome GCT), Utamaro D’Ecaussines (member of British Nations Cup squad), Hello Guv'nor (winner Aachen 2016), and Helidor Hybris, who jumped national grand prix as a 7-year-old. Diamant de Semilly is known for his outstanding power, suppleness and balance. Candy's dam Eljenohve is an elite KWPN mare. Her sire Akteur sired the international show jumping full brothers Tepic La Silla (bronze medallist at the European Championships 2003) and Shurlands Governor, whilst through Lucky Boy xx she is closely related to such top performers as The Freak, Titan and Brown Boy who were all top level show jumping horses. Third sire Quidam de Revel, found in the third generation on both sides of Candy's pedigree, is a son of Jalisco B, one of the most influential sires of his time. Jalisco B produced numerous licensed sons who continue to be names that stand out in sport such as Quito de Bussy, Olisco, Papillon Rouge, Quel Type d’Elle, Surcouf de Revel, Sisal de Jalesnes, Vert et Rouge, Qualisco III, Reve d’Elle, Sherif d’Elle and many more. His son Dollar du Maurier led France to the gold medal at the 2002 World Equestrian Games and also took home individual silver.