A son of the fantastic grand prix mare, Fit For Fun 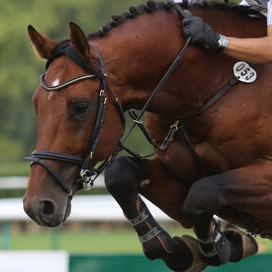 
Terms - €1200+VAT for unlimited attempts with frozen semen, for one named mare in one breeding season. If the mare is certified not in foal by the end of September, €1000+VAT will be refunded.

About - Camargo is a fantastic addition to our roster, descending from an unbeatable pedigree full of international grand prix horses. Camargo jumps with power, scope, and perfect technique, that saw him fly up the levels and begin jumping international 1.50m classes as a nine-year old. With Luciana Diniz in the saddle, he has racked up several wins and placings on the international circuit.

Sire - Canturo was the last licensed son of the great Cantus I. As a five- and six-year old, Canturo competed in the Bundeschampionate finals. Aged seven he reached the finals at the World Championship for young horses in Lanaken. At eight, he won and was placed internationally at Wien, Rome, La Baule and the Swedish Derby of Falsterbo. As a nine-year-old, Canturo won in Spruce Meadows and was nominated for the Olympic Games, and in 2005 he was the winner of the prestigious Aachen grand prix.

Damline - Camargo's dam Fit For Fun needs no introduction, as one of the best grand prix horses at top level. Under Portugal's Luciana Diniz, 'Fitti' finished 9th individually at the 2016 Rio Olympic Games, and has also competed at two European Championships, and a World Cup Final. Fit For Fun has won more than €600,000 on the GCT circuit alone, winning the season-finale Doha GCT Grand Prix in 2015 to take the overall 2015 title, ahead of Scott Brash and Rolf Goran-Bengtsson. Her sire For Pleasure has been described as the 'Horse of the Century'. With his suppleness, scope and attitude being reliably passed on to his foals, For Pleasure is in as much demand today as he was during the height of his career. He retired at the age of 20, having won his last ever class, the Leipzig World Cup qualifer, and having been sound for his whole career before a tendon injury aged 19. His international career was exceptional; he was on four gold-medal-winning teams for Germany; two Olympic Games (Atlanta 1996 & Sydney 2000, where they finsihed 4th individually), and two European Championships, at Hickstead in 1999 where he was 5th individually, and Donaueschingen in 2003. At Donauschingen, he also won individual bronze, the first ever individual medal for Marcus Ehning. He also won gold and silver medals at he German National Championships. His career earnings totalled over €1.8million, ahead of Milton, and his offspring have won over €2.5million between them.