A modern, athletic stallion with a wonderful temperament, superb technique and plenty of scope 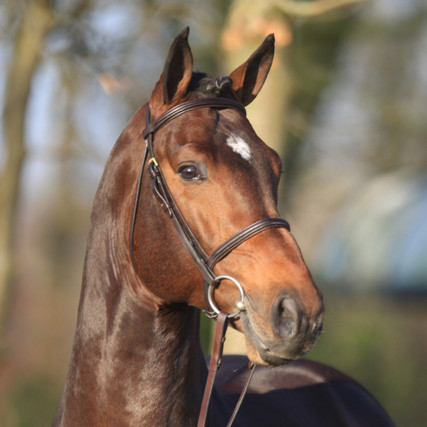 
Terms - €1200 + VAT for unlimited attempts with chilled semen, on one named mare during one breeding season. If the mare is certified not in foal by 30th September, a 100% credit applies the following season for any stallion from the same stud.

About - Cador is a very modern stallion; he is incredibly athletic, has a strong frame, a wonderful character, superb technique and plenty of scope. With this combination of attributes, Cador is destined for breeding and international sport. Cador wass Oldenburg Stallion of the Year in 2015.

Performance - He passed his 30-days-test in Neustadt-Dosse with a total score of 8.43. For his jumping ability he got the highest mark of 9.06 (scope: 9.25, technique: 8.50). In 2010 and 2011, Cador won young horse classes with marks up to 9.0 and also qualified for the Bundeschampionat. In 2012, he was placed in various 1.35m classes, and placings at international level followed in 2013 and 2014. In 2015 and 2016, he was placed in Grand Prix up to 1.55m, including 6th in a 1.40m class at the prestigious Hamburg GCT, and 8th in the Oldenburg CSI2* grand prix. As a youngster, Cador was leased to “De Ijzereman” in the Netherlands for two years. After returning home to Hof Sosath, he competed at the national championships in Rastede and came 3rd in the Oldenburger Landeschampionat. Only two weeks later, he was champion of the 4-year-old horses in the “Deister-Cup” with a score of 8.9.

Sire - Sire Catoki is Philip Weishaput's World Cup horse, winning the Bordeaux leg of the series in February 2011. He was reserve Bundeschampion in 2003, Weser-Ems state champion and won the GP of Rastede in 2006. He has since been passed to young Danish rider Emil Hallundbaek, who piloted him to 5th at the FEI European Junior Championships 2015 and placed many times at 1.50m, a testament to his rideability and talent. Catoki has several offspring jumping at grand prix, including the licensed son Carrico. Catoki's sire Cambridge was also the sire of the Chambertin, who in turn sired the much-praised, but now deceased, Chacco-Blue.

Damline - Cador's dam Lady Heida II scored 10.0 for jumping in her performance test, and was full sister of the National Mare Champion Lady Heida I. They are line bred on Landor S's family - with the two grandmother's of Cador's dam being full sisters.  Landor S and Contender prove again the good combination they form, as with Lauterbach and Lambrusco Ask. Landor S has produced top jumping horses such as Leoville, Lobster and Blue Loyd, who won individual bronze at the London Olympics with Irishman Cian O'Connor.

Progeny - Cador's foals are modern, long-legged types with outstanding basic gaits. Several foals won qualifications to the German foal championships, and Cador x Limes filly was 3rd at the final. He has had foal champions in Ganderkesee, Thuringia, Bassum and Dannenberg, and also produced his first licensed sons, among them Campitello and Casanova. His very first offspring are now jumping successfully at 1.30-1.40m level, and several descendants won young horse classes and qualified for the Bundeschampionat and the World Championships for Young Jumping Horses. Cador is very suitable for different types of mares, he passes on long legs, a correct exterior, a good frame and an athletic type.