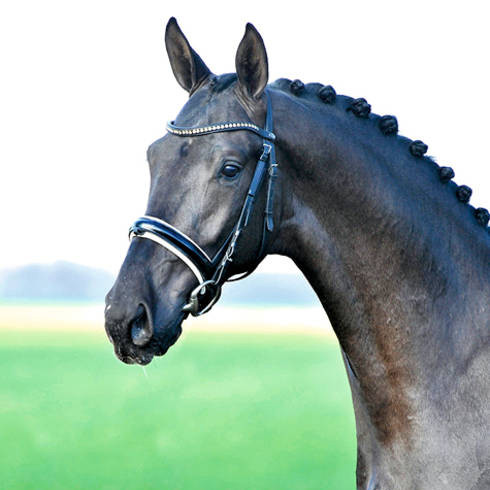 
Terms: €1000 + VAT per insemination (2 straws) allowing the registration of one foal. If the mare is certified not in foal there is no refund or credit applied.

About - A dressage prospect from a superb damline. Beautiful type, perfect gaits and first-class rideability. He is a model stallion, beautifully balanced, with superb, eye-catching movement and an exceptional trot.

Performance - In 2014, Bernay passed his 30-day test in Münster-Handorf with well above-average results. In 2015, he competed for the first time and won a novice class for young dressage horses.

Sire - The highly talented sire Boston, who was bred in the Netherlands, only had a short spell of breeding in Germany. With Isabell Werth he was successful in tests for young dressage horses and has nine licensed sons, including the 2014 Westphalian Champion.

Damline - The dam Lady Leatherdale is full sister of the licensed stallion Lord Leatherdale, who was a winner at advanced level. The damsire Lord Loxley was premium stallion, Bundeschampion and Vice World Champion of young dressage horses. The son of grand prix star Lord Sinclair I, Lord Loxley was successful as a young horse, has won up to prix st georges, and has produced numerous top horses such as Bundeschampion Laetare and FS La Noir.

Progeny - From his first crop, there were numerous foals awarded a premium, which were sold for top prices to well-known breeders abroad and in Germany. At the 2018 Mecklenburger Stallion Licensing Beau Noir (Bernay x Salut Le Bon) was named champion.