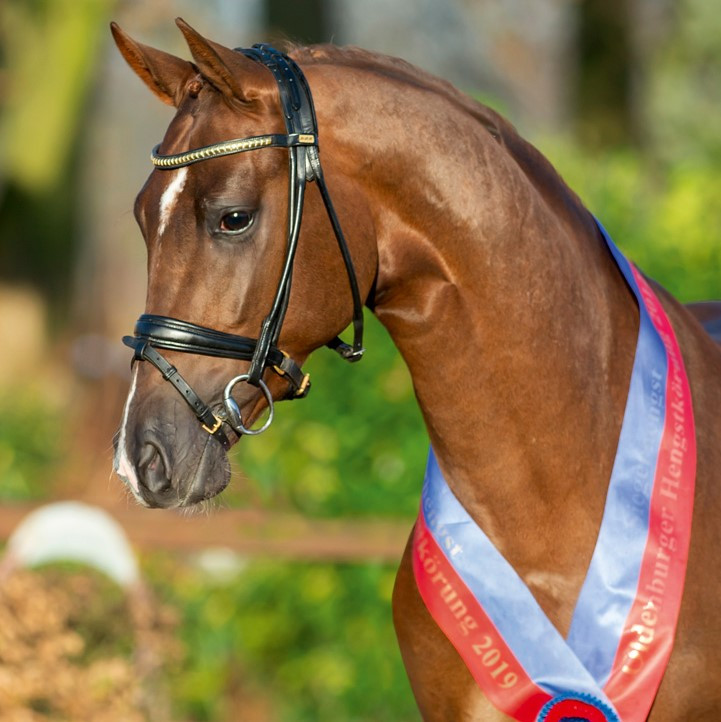 
Terms - €1000 + VAT for unlimited attempts with chilled semen, on one named mare in one breeding season. If the mare is certified not in foal by the end of September, €700 + VAT will be refunded.

About and Performance- Bellany is a young stallion who made a huge impression on the audience in the Oldenburg licensing and was crowned Champion stallion after being commended on his majestic appearance and wonderful movements. With his bloodlines showing all the qualities of an elegant dressage stallion and he is one who loves the atmosphere of shows, and performs for an audience.

Sire- Bon Couer was a premium stallion in Verden 2014, and won his 30-day test in Schlieckau in a very strong field with total points of 9.1 for his gaits. During the 30-day test, he was rewarded with the maximum of 10.0 several times. He has been awarded 9.0 multiple times for rideability during qualifiers to the Bundeshampionat. He was also champion in Hannover 2016 and was, both as a 3-year and 4-year-old Reserve-Bundeschampion in Warendorf. Bon Coeur is a really modern sports horse, with three very good gaits, fantastic mechanics and superb rideability. He was awarded the Weltmeyer Prize 2017, from the Hanoverian Association for his magnificent year in the sport. In September 2018, Bon Coeur made his first start in Sweden. He had an impressive 93% in the 6-year-old test, with a 10 for future prospects. In January 2020 Bon Coeur made his international small tour debut with +71% at Wellington, Florida.

Damline-  Bellany comes from a strong damline who has already produced a number of sporting offspring such as René Tebbel‘s Ramiro‘s Son and Delta's Bubka who holds a jumping bloodline which is saught-after in modern day dressage breeding. His damsire De Niro was vice Champion of the stallion performance test in 1997 in Adelheidsdorf. In 2001, he won the German Championships of Professional Riders with his rider Dolf-Dietram Keller, the following year he won international Grand Prix and Grand Prix Special dressage tests in Saumur and Berlin. In 2004, De Niro provided the champion stallion Dancier at the licensing in Verden, following two vice champions in previous years. 4 years later De Niro was honoured by the Hanoverian Society with the title "Stallion of the Year". In 2011, the overall amount of prize value of De Niro's descendants reached more than 1,000,000 Euros.