Bernay and Desperados in perfect harmony 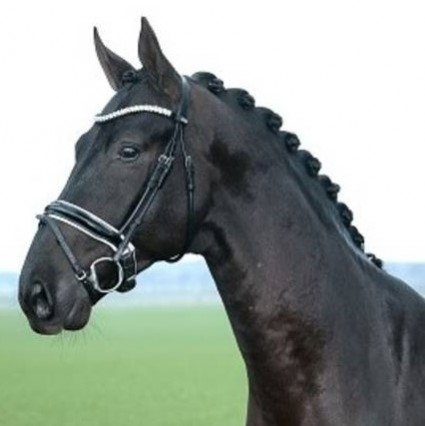 
Terms: €800 + VAT for unlimited attempts with chilled semen on one named mare for one breeding season. If the mare is certified 'not in foal' before Sept 30th, €500 +VAT will be refunded.

Please not: Unavailable util after the 9th April 2022

About & Performance - He is an impressive black stallion, with a striking appearance influenced by his father Bernay. He has three superb basic gaits inherited from two outstanding direct ancestors including Desperados. He has a large active walk, the trot is powerful and active with good rhythm and enormous shoulder freedom. The canter is also spectacular, but at the same time extremely workable for a dressage career.

Sire - Father Bernay had been in the fast lane for breeding and sport for years. As a foal maker he has produced 15 licensed sons so far. His father Boston is a direct son of Jazz and was able to deliver many important horses to German breeding in his short career. Bernay's dam Lady Leatherdale is the full sister of the licensed stallion Lord Leatherdale. Bernay's dam's sire, Lord Loxley, was himself a national champion and vice dressage horse world champion and produced several Olympic horses. With an Intermédiaire II victory, Bernay knocked on the door of the premier class, the Grand Prix de Dressage.

Damline - Mother's sire Desperados FRH was at home on the world stage of dressage for years. Under Kristina Bröring-Sprehe he won team gold at the Olympic Games as well as World and European Championships and in 2016 was the most successful dressage horse in the world. At the same time, the son of De Niro, who was able to top the WBFSH ranking of dressage sires for years, set breeding milestones. His 36 licensed sons include Destacado FRH, the current winner in the final of the Nuremberg Castle Cup and Destano, one of the most successful Grand Prix stallions in the world. Kristina Bröring-Sprehes Grand Prix winner Destiny OLD is one of his 60 S-successful offspring. With the epoch-making Sandro Hit, the third generation is currently third in the WBFSH ranking of the world's best dressage sires.