A young stallion by a World Champion who shows scope and rideability. 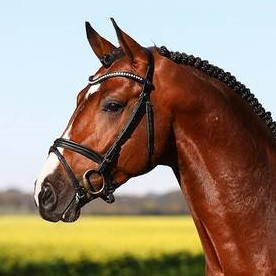 
Terms: €1100 + VAT for unlimited attempts with chilled semen on one named mare for one breeding season. If the mare is certified 'not in foal' before Sept 30th, €600 +VAT will be refunded.

About & Performance -  Baggio has all the characteristics of a top sire. He is a very modern stallion, with long legs and has an exceptional ability to perform. Taking into consideration that Baggio is a showjumper, his movements are extraordinary. His trot is always active while his uphill canter represents the timeless virtues of Holstein breeding. He impressed the audience and judges alike at his licensing, showing scope and power but also a very careful technique. Baggio has all the qualities for international showjumping.

Sire - Bratzau was 3rd at the Selle Francais stallion licensing, and also approved at the Holstein licensing. In both tests, he impressed with his jumping technique and received a lot of praise. In 2015, Brantzau passed his performance test in Schlieckau, where he received an average of 8.3 for jumping. He scored nines for character, temperament and loose jumping. In 2016 he won a Bundeschampionat qualifier under Thea Jelcic in Germany now under Jur Vrieling he has jumped clear rounds at his first international shows in Zuidbroek and Drachten.

Damline - Casall ASK was winning grands prix aged 18 with Rolf-Goran Bengtsson, who rode him since 2005. As a six-year-old, he was third in the Bundeschampionat and Schleswig-Holstein Champion, but it is his international career that has been exceptional. He was the overall winner of the Longines Global Champions Tour (GCT) in 2016, winning not only the final in Doha but also the Paris and Valkensward legs. The previous season, he won the Rome and London GCT grands prix, and was third in the GCT rankings at the end of the season; throughout his career, he has won or finished on the podium in a GCT grand prix 22 times. He has won over €1.8 million on the Global Champion Tour alone. He was also 4th individually at both the 2014 World Equestrian Games and the 2013 European Championships, where he also won team bronze. His soundness and reliability have been remarkable - he has never missed a season in his 13-year career, and he is ranked fourth on the WBFSH Sire Rankings for 2016.

Progeny - Baggio won the Silver Medal for the Oldenburg Main Premium award in 2020 based on his quality offspring and having produced an Elite Foal in Verden Auction.