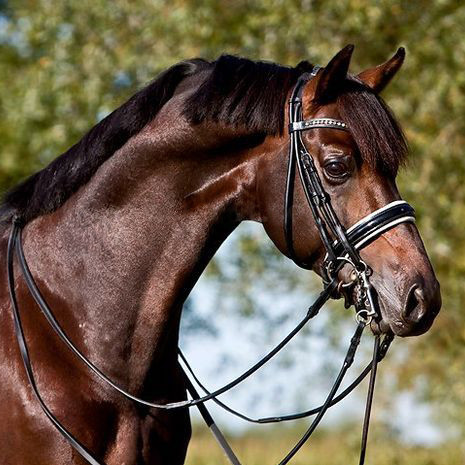 
Terms - Frozen semen €1500+VAT per dose for the registration of one foal.

About - Apache was one of the best examples of modern KWPN breeding, known for his super movement, powerful hind leg and extreme suppleness through his body. He produced super foals of a lovely modern stamp who can really move.

“Apache was a very special horse to all of us”, says Emmelie. “Of course he was special for Ad and Annemiek, but also for Jeroen and me. The whole road we did with him was something very unique."

Performance -  He started his career as reserve champion of his KWPN licensing, and in December 2015 he made his international grand prix debut, scoring +73% in the straight and +76% in the freestyle. Since then, he has continued his campaign at grand prix level, with scores of +75% in a World Cup qualifier.

Sire - Apache's success as a sport horse was almost guaranteed by his pedigree, which contains eight Grand Prix horses in the first five generations. His sire, UB40, is a modern, long-lined stallion who is frequently used to add refinement to more old fashioned mares, and the same can be said for Apache. UB40 was reserve champion of his performance test in 2002, and had several wins at international prix st georges level. He is also the sire of licensed stallion El Capone, (damsire OO Seven). UB40's sire Olivi, grand prix and keur stallion, is by the legendary Jazz, from the Utopia mare line. UB40's dam, state premium mare Kilucienne, is by the influential Trakehner Michaelangelo, out of a daughter of the KWPN foundation stallion, Farn.

Progeny - In the past five KWPN stallion shows he has had several offspring selected for performance testing. His foal report states that his foals are of a uniform riding type, well developed foals, with a good rectangular model and an appealing front. The trot has good scope with a good bend in the joints, and the canter is easy with good ground cover and balance.

Apache sired Indian Rock, champion of the 2016 KWPN licensing, out of a mare by Vivaldi. Judges consistently awarded Apache a 10 for his trot and use of his hind leg, and he consistently passes on this electric movement to his offspring. Notable progeny also include the licensed stallion Grand Galaxy Win and Gio- who scored +79% at his grand prix debut under Charlotte Dujardin