Supple stallion out of an exceptional damline 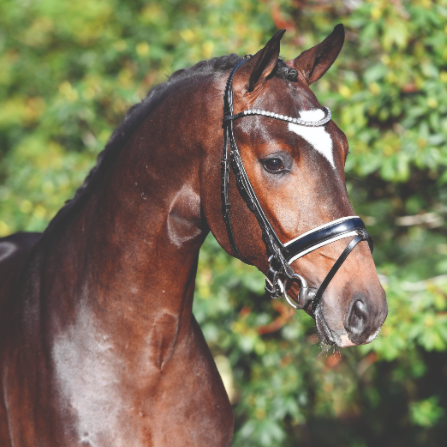 
Terms  - €800+VAT, allowing unlimited attempts with chilled or frozen semen, for one named mare in one breeding season. If the mare is certified not pregnant before the end of September then a 50% credit applies to spend on a Schockemoehle / Helgstrand covering the following year. If the first AI of the year is July 1st or later, the credit the following year is 100%.

About & Performance -  Debutant PS is just beginning his career in breeding and sport. He holds many appealing qualities in both his movement and conformation, with good foundations and an ideal construction of the shoulder, back and croup. He impresses with his high level of rhythm, looseness and swing in all three gaits. He is a modern stallion who gives a glimpse into the future of performance horse breeding.

Sire - The sire Deparon U.S., from the dominating stallion line of Donnerhall, was placed fourth with Isabel Freese/NOR in the final of the German Championships of four-year-old stallions in 2017. He then moved to the Netherlands and is successful up to advanced level with Danielle Heijkoop/NED. Many of his foals have won awards - and with Debutant PS, a colt from his first crop of foals has now been licensed.

Damline - His dam Zantana was placed in young dressage horse competitions and was sold in December 2019 at the P.S.I. auction in Ankum for 955,000 Euros, to a renowned dressage yard in the Netherlands. She has also produced our licensed stallion Fürst Zonik PS (by Fürstenball). Her half-sister Neandra PS (by Negro) produced Top Noir PS (by Top Gear OLD), who was sold through the PS Online Auction.