Grandson of the influential Argentinus 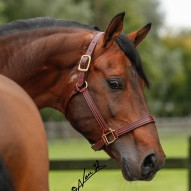 
Terms - €1550+VAT for three attempts with frozen semen, for one named mare in one breeding season. If the mare is certified not in foal at the end of September, €1200+VAT will be refunded.

About/Performance- Armitage's Boy is the  son of the very powerful Argentinus. Armitage was successful up to CSI 5* with Marcus EHNING. Armitages Boy performed for 7 years at the highest level and with two different partners! First with Aymeric De Ponnat,  for several seasons one of the pillars of the French team. He retired from sport in 2019, at the age of 17, and has since been devoted  to breeding.

Sire- Armitage climbed the ladder of success at breathtaking speed: participation in the Bundeschampionate twice, international ribbons at the age of seven.  Grandsire Argentinus is the most influential son of the Hanoverian stallion, Argentan I. Argentinus’ dam is by Duden II who was highly esteemed as a producer of top quality performance horses and wonderful broodmares. The list of Argentinus' achievements during the course of his long career is long – Champion Stallion in Oldenburg, Stallion of the Year in Hanover – but the statistics on his internationally successful off-spring show the true dimensions of his greatness.

Damline-  Kamora is a daughter of FEO, father of several international winners like Its Me Du Sartay under the saddle of L. BEERBAUM. She also produced:
- Kathy Pearl, mother of ARCO, CSI 2* in Poland

Progeny- Armitage's Boy's  first offspring are 8 years old this year and seem to inherit his qualities as a competition horse , including his strength and respect . Several of his sons are approved.